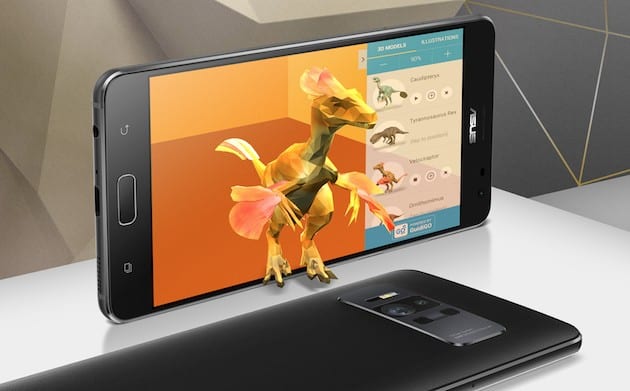 Most of the users don’t know the difference between the augmented reality and the virtual reality as the difference is vast but feels to be thin. Now Asus is working in close connection with Google to build a new smartphone which possess the ability to bring together the VR and AR. This particular smartphone Asus Zenfone AR will be backed with Qualcomm based chipset to do the hard work without any sweat. Qualcomm was keeping this tri-association under wraps and it was expected to be revealed at a later stage but this announcement was leaked prior to it.

Asus will feature support for the Google Daydream

Asus Zenfone AR is the latest device from Asus to feature support for Google DayDream View VR along with the presence of Tango depth-sending camera. Tango camera was first seen in the Lenovo’s Phab 2 Pro which brought the first taste of the Google’s Tango augmented reality software to the consumers. Apart from Tango camera Asus Zenfone AR will also comes loaded with the powerful Qualcomm 821 processor which is at par with Google Pixel smartphones.

Google’s new DayDream VR platform is supported by few devices which includes Google own Pixel smartphone namely Pixel, Pixel XL along with Motorola Z and Lenovo Phab 2 Pro. These devices have not been able to capture the attention of the consumers as they offered mixed experience. Lenovo Phab Pro 2 has brought the coveted augmented reality way too early for the targeted consumers wherein users possess the ability to add cool virtual objects and realities right on the phone screen.

Lenovo device has been a great advantage for the developers to build VR apps and test them with ease. It has kept normal users curious and excited about the abilities and potential of the AR on the phone. Asus Zenfone AR is set to bring together the AR and VR in a never seen before fashion. For the time being it can be effectively stated that Zenfone has been successful in bringing Tango and Daydream at a single device.

The Amazing experience for consumers

Location aware camera isn’t new as it was first seen with Tango camera which brought the first hand experience of a heightened level of 3D. But Asus is aiming for offering something splendid or extraordinary for the users which can help in rising above the competition and establishing itself as a serious player in the smartphone category. Asus is aiming at combining the VR with a movement sensing technology which will help in creating highly interactive and powerful reality apps. Such reality apps will be able to track the movement of users across the room thereby enabling a premium VR experience. Such heightened level of virtual reality experience was first seen on the dedicated VR headset namely HTC Vive but it requires support of the external boxes and sensors.

Ausus offering with Asus Zenfone AR will serves as blueprint for upcoming range of Android based devices to bring about similar kind of VR experience to the consumers.