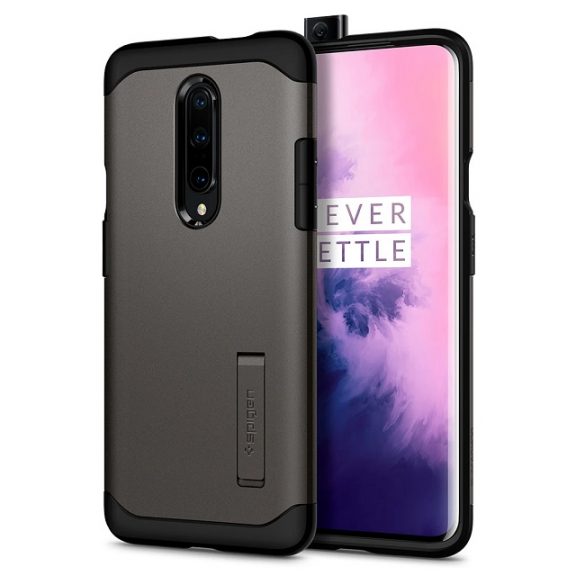 A lot of people love Popup Camera Phone for a different number of reasons. One of the best reasons is these best Popup Camera Phone allow higher-screen to body ratio. So, there is no need for a notch or a bezel on your screen. Apart from that, these phones have a futuristic vibe and give concerned users peace of mind with privacy as the front-facing camera isn’t staring at them all the time.

Compared to the last year, the present Popup Camera Phone are coming with lots of improvements. The first smartphone of this kind was Vivo Nex, that was released in 2018. Since then, many other brands have launched their own popup camera phone with small configuration changes. If you’re striving to get your hands on the best Popup Camera Phone in 2020? Then don’t worry, we’ll discuss the best popup camera smartphones and slider phones in this post.

In this post, we’ll show you two kinds of best popup camera phones. The first one will be a list of best phones with motorized popup cameras and the second One consists of best slider phones with hidden selfie cameras.

Let’s get into the list of best Popup Camera Phone.

OnePlus has done a great job in delivering the best Popup Camera Phone to the people. This particular device comes with the latest Snapdragon 855 Plus chipset along with 12GB of RAM. So, it’s blazingly faster than other devices, its McLaren Edition is even quicker than its standard pro version.

The OnePlus 7 Pro was launched on 14th May 2019, since then it has been the most popular popup camera among all the devices. It comes with a powerful 4000MAH battery, so it lasts longer than other devices. The long 6.7inch screen will make people fall in love with this device. The OnePlus phone runs with Android 9 Operating system, and it’s powered by 2.84 Octa Qualcomm Snap 855 dragon processor.

This device comes with special features such as in-display fingerprint sensor, three back cameras and a 16 Megapixel Popup Camera. Apart from that, it’s QHD+ resolution screen resolution makes it clear.

However, this OnePlus 7T Pro still has a few drawbacks as it doesn’t have an IP rating, and doesn’t have the headphone jack which makes it even worse for music lovers like me. But while comparing all other features, i got to know that this is better than other popup cameras.

Although it doesn’t support wireless charging but it still comes with a boost charger which charges the device blazingly fast. The OnePlus 7T Pro is a great option for you if you are searching for the best Popup Camera Phone with all perfect features.

Oppo Reno is one of the best popup cameras you should look at if you are striving to get a stylish smartphone. This particular phone stands out because of its unique 16MP shark style popup camera. 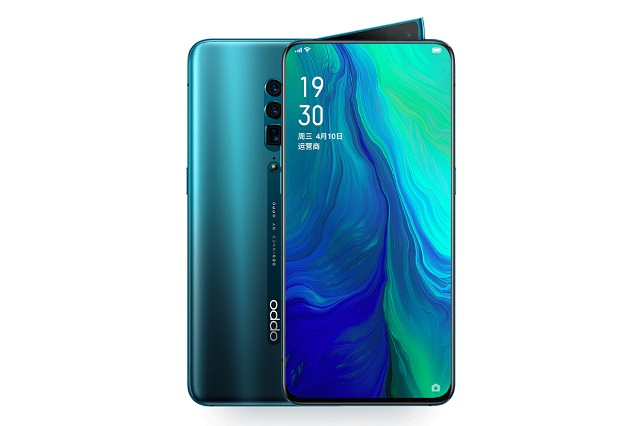 The shape of Oppo Reno is bigger than the One plus 7T and other popup cameras, so it has the capacity to capture more region in a selfie. This device is launched on 28th May 2019 and took the market by storm, but later on, its sales have got slightly down due to its drawbacks.

Oppo Reno 10x Zoom comes with a large 4065mAh battery to support its giant 6.6ich screen. It runs on Android 9.0 Operating system and it is powered by 2.84 octa Qualcomm Snapdragon 855 processor.

The oppo’s unique feature is its rear triple camera setup with 10x hybrid zoom and 5xoptical zoom. So, it’s better at taking long-distance images. It has features like the in-display fingerprint scanner and has 8GB of RAM.

Even with all these features, its performance and overall experience is somewhat weaker than OnePlus 7T Pro. So, we have kept that in the second place on this list of best Popup Camera Phone.

In case, if you want to save money, then you can go for Oppo Reno 2 as it is also a better option. Even it also has a fin style popup selfie camera, but it did not have the Oppo Reno 10X Zoom option. 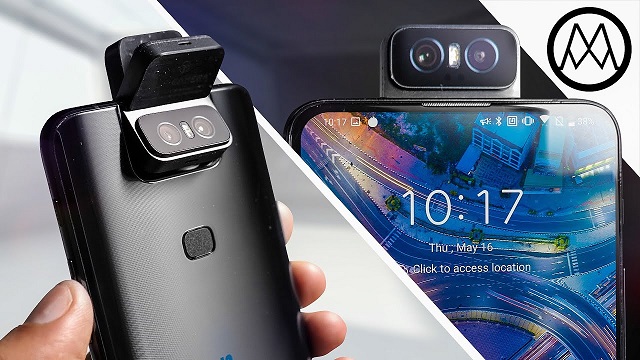 Asus 6z is one of the best Popup Camera Phone you should check out. This device was launched on 19th June 2019 and has gained enough popularity. Asus 6Z is out with a powerful 5000mAh battery that is better than both the OnePlus 7T Pro and Oppo Reno.

This smartphone is different from other Popup Camera Phone on this list. Instead of popping out from the top edge like other phones. It flips from back to the front, which means your rear cameras that have 48 and 13MP sensors are used to take front selfies. This is also called the slider phone.

Asus 6z has an innovative camera, with a couple of unique things. This runs a near-stock version of Android and has a headphone jack onboard as well. It supports expandable storage and even has a gorgeous design.

This smartphone has excellent features, and its price is affordable as well. However, this company has some corners that need to be filled. There is no official IP rating or not even wireless charging facility.

It comes with an LCD screen instead of modern displays. So, with all these drawbacks it can’t get to the top of the list. Nevertheless, it has some cool features and excellent battery life, so I have listed on this best Popup Camera Phone list of 2020.

Xiaomi’s is one of the notable brands for smartphones. So, why we will miss Xiaomi on our list of best Popup Camera Phone. The Redmi K 20 Pro and Redmi K20 both have popup cameras, and these look stunning in appearance as well.

Both the Redmi k20 pro and Redmi K20 are quite similar in many ways. They look similar, they have similar features, and both have a 20MP pop-up camera that comes from the top edge. This popup camera comes in just 0.8secs, along with that there are six popup sounds available to choose on this device.

Rest all features are similar such as in-display fingerprint scanner, three back cameras, and 4000 mAh battery life. 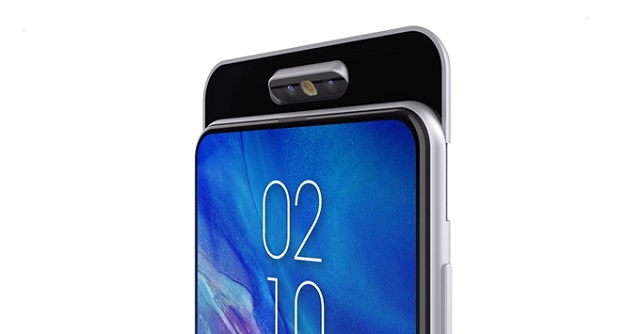 Samsung Galaxy A80 is the other best popup camera phone in this list. This phone isn’t like the traditional popup camera phone that elevates from the top edge. Instead, this phone has a popup flip camera at the back and it slides up and then rotates as the front camera.

So, basically, it’s different from other devices and more complicated, but it’s working fine. Although it’s not like other popular devices, it still has a lot to talk about. Samsung is a popular brand, so it doesn’t have to be a flagship killer, so it’s not a flagship killer, but it has its own reputation. This device is powered with snapdragon 730 chipsets with 6.7inch display.

Unlike other flagship killers, it doesn’t have the headphone jack or supports any expandable storage. So, if you are striving to have a headphone jack better shift to the other devices on this list.

It is deficient in battery life as well, so I have listed OnePlus and other brands on the top list rather than Samsung Galaxy A80.

Realme X is one of the best Popup Camera Phone you should consider in 2020. This device has a 16MP pop-up camera that elevates from the top edge of the Realme X device. The speed of its elevation is high class as it is up in 0.7 seconds.

This Popup camera is positioned at the centre to allow natural-looking selfies. It also has auto-retracts when the moment the phone detects a fall. 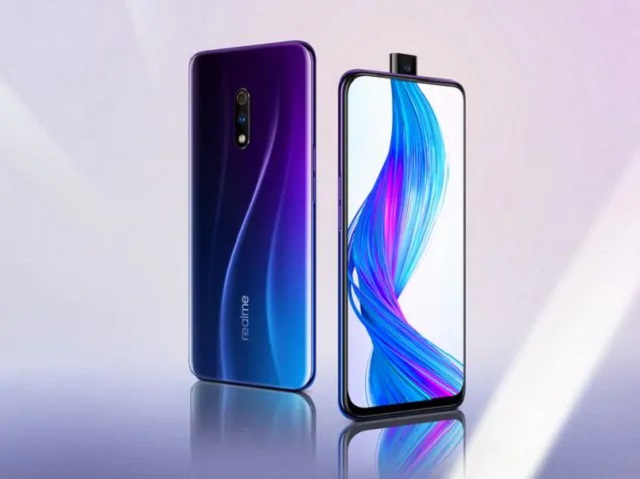 Realme X is powered with the Snapdragon 710 chipset, and it comes with 8GB of RAM. It has a 6.53-inch display with all features covered. It has an in-display fingerprint scanner, headphone jack and more. If you are striving to get the best Popup Camera Phone? Then do check out this Realme X as an option.

The Honor 9X is one of the best Popup Camera Phone you have to consider when you are looking out for stylish popup camera options. This device has a 16MP pop-up camera module that has a fall and downward pressure detection. So, it will protect your popup camera whenever it detects fall.

This phone has 6.59 inches full HD+ display and has enough features such as in-display fingerprint scanner, headphone jack and more.

Honor 9X comes with all the google apps installed including the play store. It has three rear cameras, and Kirin 710F Chipset powers it.

These are the best popup cameras phones you have to look at in 2020. Hope you enjoyed this list of best Popup Camera Phone.