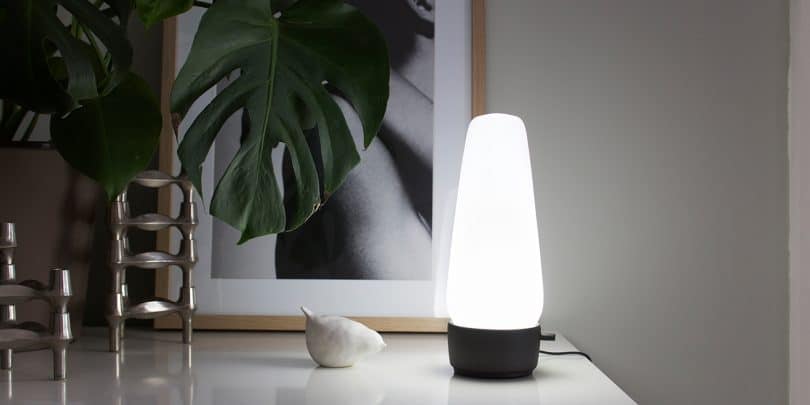 Covi is a smart table lamp and language assistant in one. In the case of kickstarter, the device from Senic has already reached its financing within two days.

While more and more Amazon Alexas, Google Assistants or Apple Siris “move in” at our home, the founders of the Berlin start-up Senic go a step further: They have developed a smart table lamp. The name of the product: Covi.

What at first sight looks like an ordinary bedroom accessory by Ikea is, in fact, a digital all-rounder – which clearly seems to be a good thing. Just two days after the publication of the project on the crowdfunding platform Kickstarter, the financing target of 75,000 euros had been reached. In the meantime, more than 100,000 Euros have already come together for the production of Covi. “The fact that the campaign was so successful, both satisfied and surprised us. The fact that we receive more money than we had planned can enable us to develop new services even more quickly, “says Senic co-founder Tobias Eichenwald against business insiders.

Lots of technology inside the lamp

“We skype with our supporters or visit them at home when they live in Berlin like us. Then we can see and understand the needs of a smart home user – for example how to activate the voice control on the lamp or what devices the users want to control prioritized. ”

Inside the lamp are hidden a processor, loudspeaker and a microphone. Thus, not only light is provided. You can also ask Covi directly questions, for example at work: “What does holiday in Portuguese mean?” Is cited as a sample question in the advertising film. The lamp knows the answer, but Covi is equipped with Amazon Alexa at the beginning. But the lamp can not be controlled with Alexa alone, you can choose your own language service.

Different devices can be coupled with Covi

By the production as a lamp there is no sterile loudspeaker in the room, but an object, which anybody in his apartment needs anyway. This is why, according to the developers, they have placed great emphasis on a timeless design.

A further special feature are the automation possibilities with which we are on the subject of Smart Home. In the product video it can be seen that Covi can be set to perform certain actions at certain times of the day. So in the morning the light is dimmed slowly upwards and at the same time played over Sonos music – so Covi can be used, for example, as an alarm clock.

Automated processes can be set

Via the location function on the coupled smartphone it is also possible that Covi recognizes, if the owner comes home and then certain actions starts: for example light or music turn on. At the beginning of 2018, Covi is to be delivered to pre-buyers, it says.