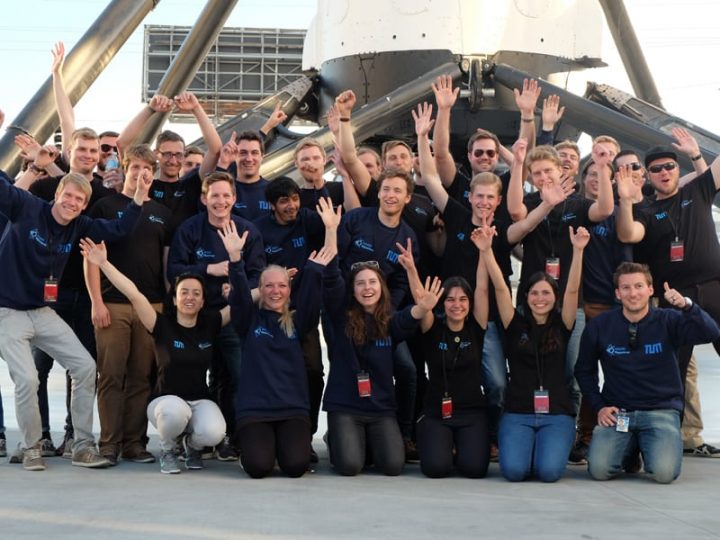 At the beginning of the year, a team from the TU Munich won the Hyperloop competition from SpaceX. In August the successor team will take part. Its capsule is smaller, stronger and at least four times as fast.

The new prototype looks almost tiny. The narrow sled weighs only 80 kilograms on the scales, which was revealed by a team from the Technical University of Munich on 18 July. By comparison: The original pod of WARR Hyperloop weighs almost 600 kilograms. For this, the new Pod is barely wider than it was the air intake of the predecessor alone. This is exactly what the official Hyperloop Pod Competition 2 will bring to the end, the end. For this, the new team wants to boost the performance of the old Hyperloop. It had cleared the victory in the category “Fastest Pod” in January with a top speed of 94 kilometers per hour.

“In the competition in August, officially only the speed counts,” says Gabriele Semino, one of the three project managers. “There are no criteria such as design or construction.” That is why the 30-man team from Garching has started all over again. The current hyperloop pod was created in just five months. In February, the team had once again completely overhauled its designs and previous ideas submitted to SpaceX. Including plans for a hover mechanism. Much had been achieved, would not necessarily bring something to the current requirements on the test track in Los Angeles, “explains Semino.

“We wanted a light and, above all, powerful device,” says Semino. Almost everything is made of carbon fiber-reinforced plastic – even essential parts, which would otherwise be made of aluminum. The heartpiece, however, is a 66-horsepower electric motor with a cascade of 20 particularly fast discharging batteries that drive the small wheels of the pod. In order to prevent them from spinning during the strong acceleration, they are hydraulically pressed onto the rails via hydraulics. “This is a spoiler for sports vehicles,” explains the hyperloop Pod developer.

“We calculated everything and performed tests,” says Semino. “We believe our pod reaches more than 350 kilometers per hour.” The team, of course, hopes for 400 kilometers an hour – maybe more. A challenge: the test track of Tesla is comparatively short for such speeds of 1.25 kilometers. The capsule has to be braked again almost immediately after the acceleration phase in order to come to a standstill in time. Otherwise, it collides with the steel hatch at the end. “Everything is designed to work,” says Semino. “But if that really is, it will be decided in Los Angeles.”

The design of the capsule has cost between 200,000 and 250,000 euros. The team was supported, among other things, by companies such as Airbus, the Roding electrician and the vacuum system developer Leybold. These have also driven material but also expertise. Likewise, members of the first WARR-Hyperloop team were also involved, who are now re-studying or working on other projects. “They always came by, looked at our things,” says Semino. “They gave advice and criticized. Your expertise has really helped us. Even when it got tight with the assembly, they were there. “

On 3 August the Pod will be packed and the flight to the USA. The team itself travels in the next two weeks. A total of 22 other teams have qualified for the Competition 2. Among them are 512 hyperloops from the University of Texas, whose pod is to reach 530 kilometers per hour. The Polish team Hyperpolo, on the other hand, wants to launch a 290-kilogram Pod with a magnetic levitation system, which is capable of 430 kilometers per hour. “Everyone who works is hard and creative,” says Semino. “But we are going to defend our victory.”