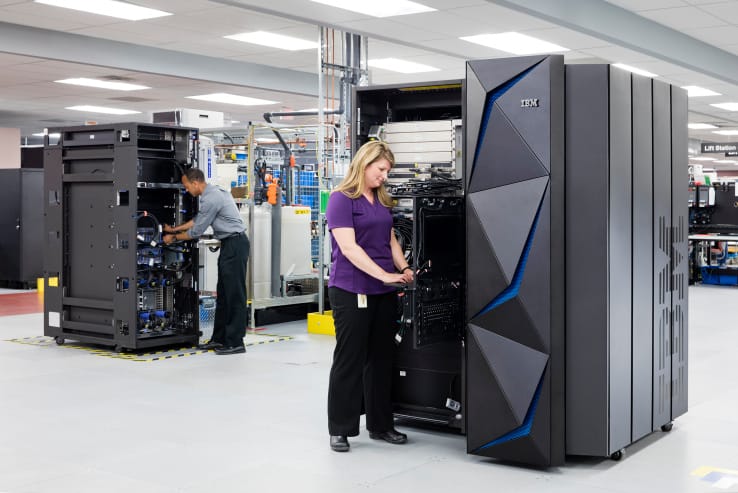 Large mainframe computers were, again and again, considered a discontinued model, now they are supposed to arouse the age of data security. IBM’s new large-scale computer “Z14” is to contain high-security encryption of the massively growing number of data theft.

IBM wants to take a new generation of its mainframe “IBM Z” the security and encryption of data to a new level. For the first time, it was possible to encrypt all the data associated with an application, a cloud service or a database, announced the company on Monday. The cryptographic capabilities of the mainframe system would now be available for data, networks, external devices or entire applications. This should reduce the risk of data theft.

Mainframe systems are large-scale systems, which are primarily designed to work as much as possible in a fail-safe manner and to ensure a high degree of data security. Often viewed as a dying class compared to x86 systems such as modern computers and servers, they are still used today in the financial and insurance sector. Meanwhile, the booking of flights on the Internet but also to a large extent via mainframes, said IBM manager Andreas Thomasch. The systems are also increasingly used for cloud and mobile applications.

With its new generation z14, IBM wants to take data encryption to a new level: it is thus possible to encrypt all data, which is connected to a cloud service, an application or a database without exception, claims the company.

IBM presented its new Z-generation on Monday to the public. The company speaks of a “breakthrough“. The system encrypts large data around the clock and in any conceivable size – without the users feeling it. Per day, twelve billion encrypted transactions will be possible. According to Ross Mauri, General Manager at IBM Z Systems, the company has used two years to discuss with a close-up of 150 customers what a modern large-scale computer can do. A sentence, which should have fallen more frequently: “Encrypt everything so we do not have to worry about it anymore.”

The risk of data theft is minimized according to IBM because the fail-safe mainframe system with the end-to-end encryption comprehensively backs up data, networks, external devices and even whole applications. The data keys destroy themselves during manipulation attempts. Not only hackers, but also insiders would not have a chance to access sensitive data. IBM manager Andreas Thomasch told the dpa that today’s computers, which are often regarded as a relict of the past, are now used mainly in the financial and insurance sector. On the other hand, online flight bookings are also going to be broadly based on mainframes. IBM is presenting its z14 today in Munich. From mid-September, the mainframe system will be available.