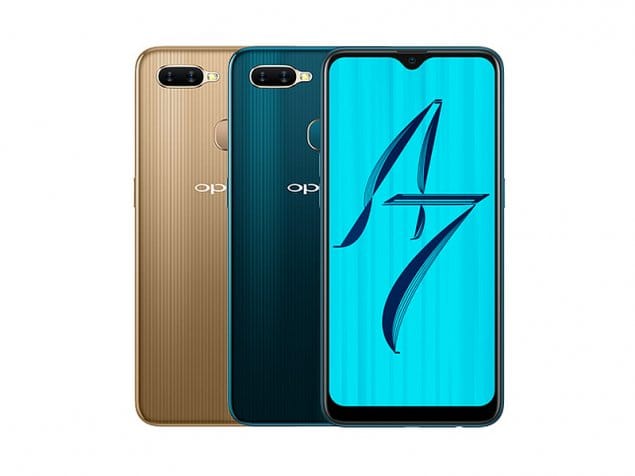 Oppo A7 Smartphone was introduced in India as a mid-range smartphone. It was already available in China and Nepal. The Oppo A7 is selling at Rs16,990 and can be purchased from Amazon India.

Let us look at the features of Oppo A7 and see if it is really worth the cost.

The design and display feature of the Oppo A7

The design of Oppo A7 is one of its unique features. It comes with a metal unibody with curved edges and curved sides ensuring a firm grip. Though the design is textured with thin glazing lines, the back is smooth.

The Oppo A7 comes with a water drop notch which houses the 16-megapixel front camera. The smartphone features a 6.2 inch HD+ display with 720 X 1520 pixel resolution. With a large display, it is ideal for watching movies and viewing videos. Reproduction of vivid colours on the screen is fairly good with enough contrast and sharpness.

The Oppo A7 is coated with Corning Gorilla Glass 3 to give it extra protection.

The earpiece is situated right above the notch. The power button is on the right whereas the SIM tray and volume is on the left. The SIM tray has three slots which includes two SIM card holders and the third for a micro SD card.

On either side of the bottom edge are two speaker vents. At the bottom, there is a micro USB port for charging and a 3.5mm headphone jack.

On the rear of the Oppo A7 is a dual camera that is aligned horizontally. The rear camera app features different modes like portrait, time-lapse, stickers and panorama.

The fingerprint reader is above the company’s logo on the rear and below the 13MP + 2MP dual rear cameras along with a LED flash. The fingerprint scanner works fast and unlocks the smartphone within a few seconds.

The Camera of the Oppo A7

The Oppo A7 comes with a 16-megapixel sensor at the front with f/2.0 aperture. The rear side of the device has a dual camera of 13-megapixel and 2-megapixel with f/2.2 and f/2.4 aperture respectively. With the camera, you can get quite good pictures in the Panoramic and Time-lapse mode. The pictures you get in broad daylight and dim lighting are quite impressive.

The 16-megapxel front-end camera is ideal for selfie lovers. Since the camera is centrally located, taking selfies is ideal as you get the right angle instead of being displayed tilted on screen.

The front and rear cameras have sticker features whereby you can add your own stories to the pictures.

Battery of the Oppo A7

The Oppo A7 comes with a 4230mAh battery. The Oppo A7 does not support fast charging. It takes two and a half hours to charge the battery from zero to hundred percent. With moderate usage, the smartphone lasts for more than a day with a single charge. However, the battery drains quickly if you use it for playing games.

Performance of the Oppo A7

The Oppo A7 is powered by octa-core Qualcomm Snapdragon 450 processor. It runs on the Android v8.1.0 operating system. The smartphone features 4GB RAM and 64GB storage. The storage can be expanded up to 256GB by using a microSD card. Multitasking and switching between apps did not cause any hitch or lag. Playing lighter games is fairly smooth on this device, but when it comes to heavier games, then there is a bit of a stutter, probably due to the old processor.

When you swipe right on the home screen, you find the Smart Assistant which enables quick access to your favourite websites. You have the option to edit the Smart Assistant and also add or remove features according to your need. By swiping left, you get access to all the apps. App drawers too are available wherein similar apps can be put.

The Oppo A7 comes with clone apps feature. It allows the user to copy an app on the home screen.

There is also the split-screen feature which is enabled by swiping up.

Sound quality is fairly good. While watching videos, you can access messages and whatsappby swiping down.

As far as the security features go, the new Oppo  comes with the face ID unlock and rear side fingerprint sensor. With either of these features, the device unlocks quickly and efficiently.

Final verdict of Oppo A7

The Oppo A7 is quite an impressive smartphone and the overall performance is fairly good.

The downside of the Oppo A7 is the Snapdragon 450, which is an old processor. Most of its competitor like the Redmi Note 6 Pro features the Qualcomm Snapdragon 636 and Realme U1 has the MediaTekHelio P70.

The other drawback is that he Oppo A7 does heat up when charging.

The face recognition feature slows down in low-light conditions.

If a user multi-tasks with more than 13 apps or has more than 15 tabs opened at any given time, then the A7 stutters and begins showing lags. The same is seen when playing graphic intensive games at medium settings.

The Oppo A7 does not support the company’s flash-charging VOOC technology.

Since most of the users of smartphones like taking selfies, the Oppo A7 offers 16MP front camera whereas Realme U1 has the 25MP camera for taking selfies and added to that it costs much less than the new Oppo .

The  A7 seems overpriced due to the Qualcomm Snapdragon 450 processor which does not deliver the best performance.

If you compare the performance and specifications of Oppo A7 with its competitors in the similar price bracket, then the Oppo A7 is definitely overpriced. The Realme 2, which is Oppo’s sub-brand and having the same specs, comes at a lower price of 125USD.