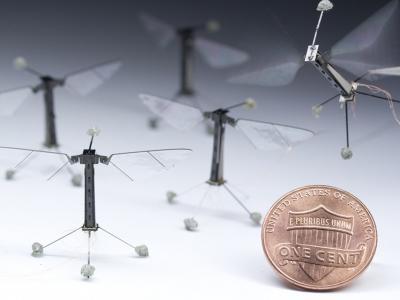 In the not too distant future, every time we see a fly loitering around a room, we may have to ask ourselves if it is really an insect or a robot.

A group of engineers from Cornell University in New York has developed a program that mimics the way an insect’s brain works to make small robots that behave as such.

Using tiny metal hair-shaped probes embedded in the wings, the robot is able to detect gusts of wind and adjust its flight accordingly, to plan its way and land, for example, on a swinging flower.

These small insect robots can be used, as well, to explore hostile and complex environments with autonomy, inside and outside our planet.

The first of its generation, called RoboBee, measures only 3 centimeters and weighs 80 milligrams and is equipped with several sensors of vision, optical flow and movement.

But, for the moment, RoboBee remains connected to a power source. The researchers are working, however, so that soon new sources of energy will make it a more autonomous robot and adaptable to complex environments. All this, maintaining its small size and weight.

The professor of mechanical and aerospace engineering and director of the Laboratory of Intelligent Systems and Controls, Silvia Ferrari, explained in a statement: “We are developing sensors and algorithms to allow RoboBee to avoid losing control or, if it is blocked, survive and continue flying, “explains Ferrari.

A simulation of RoboBee stabilized in stationary flight using a biological-inspired neural network, which learns to adapt to manufacturing irregularities in real time. Credit: Taylor Clawson.

Thus, not even a gust of wind would disorient RoboBee. “We want to develop learning controllers that can adapt to any situation,” he adds.

Chips inspired by a neural network

The technology that has been able to achieve this is based on the so-called neuromorphic chips. Unlike traditional computer chips, which use binary code combining zeros and ones, the neuromorphic chips process electrical power pics that ‘fire’ in complex combinations; similar to how neurons do it in the brain.

To make matters worse, the Ferrari laboratory is currently developing a new class of detection and control algorithms based on events that mimic neuronal activity, which would be implemented in these neuromorphic chips.

Because chips require much less power than traditional processors, engineers can enter more data in the same payload.

To accelerate the development of event-based algorithms, a PhD student in Ferrari’s laboratory, Taylor Clawson, developed a virtual simulator that can accurately predict the movements of RoboBee during flights through complex environments. For this, he used a program inspired by the biology of a neural network, which is capable of learning in real time.

In addition to greater autonomy and endurance, Ferrari adds that its laboratory plans to help equip RoboBee with new microdevices such as a camera, expanded antennas for tactile feedback, contact sensors on the feet of the robot and airflow sensors, with the appearance of small hairs.