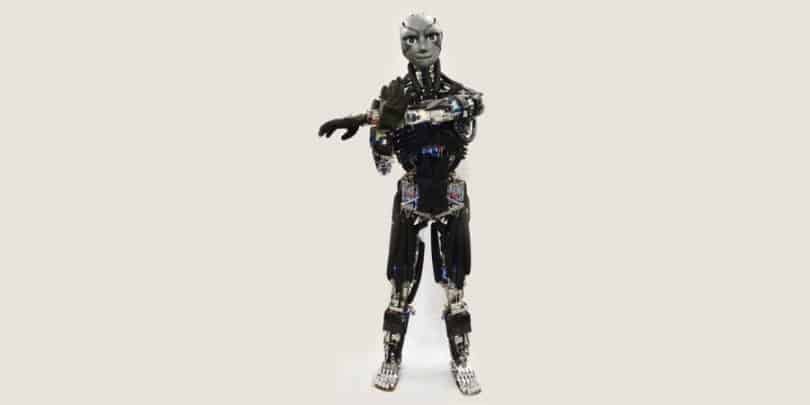 Japanese researchers have developed a humanoid robot that is sportier than many human beings. He can play push-ups, pull-ups, badminton and even sweat.

Because they really want me to feel like the lazy person I am, robots can now also do sit-ups, push-ups and something called back extensions. I had to look up the latter. I’m so lazy.

Researchers from the University of Tokyo have described in the journal Science Robotics their humanoid, which looks amazingly lifelike in its appearance and movements. The machine is radically different from the stiff and staggering robots, which can not do much more than a drop in the media. At this point a tribute to Boston Dynamics, whose latest version of Atlas is now backflipped.

The name of the wonder robot is Kengoro with great Artificial Intelligence. He’s bad at badminton and, literally, is working up a sweat.

The goal of Kengoro and its older version Kenshiro is to emulate the human body as best it can. The researchers have modeled Kenshiro on a 13-year-old boy, so he weighs about 57 kilograms. Kengoro is a bit heavier, but the relationship between foot length and shoulder height compared to humans is exactly the same for both.

A conventional humanoid can move thanks to so-called actuators. These sit in the joints and are nothing more than small engines with gears.

Kengoros 116 actuators pull on wires, thus imitating the contraction of muscles. These “muscles” are even placed as those in the human body. Only the calf muscle is operated by two actuators to generate enough power. Comparably this is about a puppet – only much more complex.

Actuators inevitably produce heat. So Kengoro has to sweat. Its metal frame, which is made of special porous aluminum, circulates cooling water. This heats up and can escape through the material as steam, thus cooling the motors down. In addition, the aluminum gives the robot stability.

Kengoro is also quite agile, six times as much as traditional humanoids. He can move his head back and forth as if he wants to narrow his neck. He can even stand on tiptoe. And all thanks to his “muscles” as opposed to the motors that move the joints in conventional robots.

The flexible spine also allows Kengoro to do sit-ups that really look like human sit-ups. Any other robot would look more like a Lego figure folded once in the middle.

Kengoro is slightly at a disadvantage compared to the stability of its Lego counterparts. Boston Dynamics Atlas can do backflips just because he has no muscles to give in when landing. Anyway, Kengoro is not a weakling: he can lift his own weight on pull-ups.

The bot loosens things up a bit, which also means that he can better imitate human movements. This is useful for several reasons. Not all of them will please Kengoro. For one thing, he would make a pretty good crash-test dummy. Current dummies are dolls that are equipped with fine sensors. The downside is that they are still passive. Instead, Kengoro could better simulate how a real person would move in an accident.

Even though humanoid robots today seem rather silly, they become more and more complex and better over time. Especially less shaky on the two. One day, they could be used as rescue robots and explore rough terrain that other machines can not. After all, people have also built their world for people. To explore the interior of, say, a destroyed nuclear power plant, it’s probably better to have legs to climb stairs and hands to turn valves. For now it only means push-ups for Kengoro.