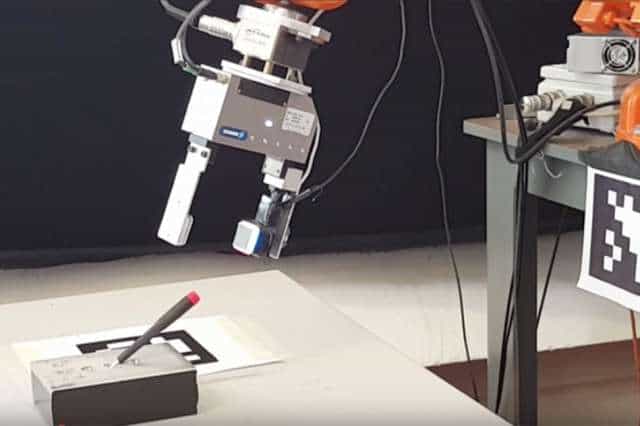 Robot that work in the home and in laboratories are packaged so gently in the future that pressure-sensitive things are not crushed. The gripper can be compared with thumb and index finger. The new robot thumb from researchers at the Massachusetts Institute of Technology (MIT) consists of a transparent gel pad sprayed with a metallic paint. When an object is pressed into this pad, it deforms.

Human hand as a model

The new gripper of this robot also has three light sources in different colors, which illuminate the object. A camera captures the reflections. “The light falls at different angles,” says MIT Professor Ted Adelson. Accordingly, the angles at which the reflected light falls into the camera are also different. From these image data, a computer then calculates a 3D image of the object.

Similar to the way the thumb and index fingers of this robot can check the properties of an object by changing the pressure – the flatter it can be pressed, the softer it is – the gel pad, also known as “GelSight“. Objects are pushed in by hand. Depending on how soft they are, they deform more or less. The camera of this robot records this session. Previously, the consistency of the object had been measured mechanically. It was now necessary to establish a relationship between the measured softness and the deformation.

After 6,400 attempts at the finish

Wenzhen Yuan, who studied at MIT Mechanical Engineering and was part of the research group around Adelson, produced with molds 400 groups of silicone objects. Each group consisted of 16 copies. Each of them had the same shape but a different degree of hardness, which was determined mechanically. Each of these specimens pressed them against the gel pad and recorded how it deformed. In each experiment, this robot selected five images, the data of which she put into a computer.

This made a connection between measured hardness and the respective deformation. A data record by this robot was created, which can serve as a source of information for robot grippers. The system determines the hardness of an object which deforms when gripped by a comparison with the stored data. The gripper only grips so hard that it does not cause any damage.