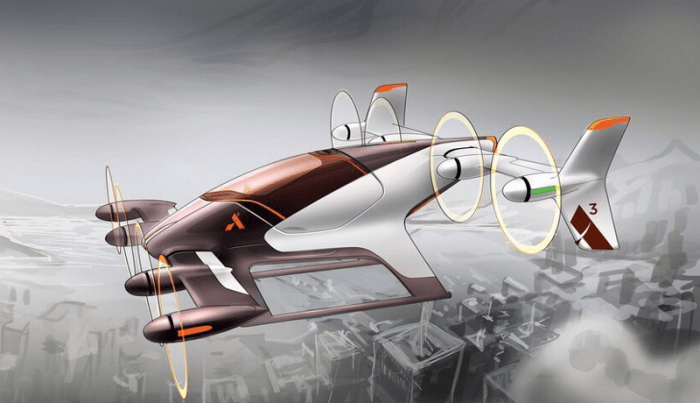 6 pm in the Evening… Rush hour in the cities…. The roads are dense, no passing by car, no matter whether it is autonomous or driven by people. Anyone who is stuck in jam is stuck. There’s no horn and no swearing. An everyday bad mood scenario shortly after the end of the night for millions of people around the world – and apparently for Airbus engineers.

Because the more time they spend on clogged highways, the clearer and clearer a vision become: “Just take off and fly over the traffic jam.” An idea that could soon become a reality. In 2020, the Airbus Group will present its first prototype of a self-propelled transporter named as Vahana. In the realization of this sci-fi dream, Vahana focuses on innovation and future technology. Customers can escape from this disastrous transport lambaste in the future via smartphone and thus arrive much faster to their destination.

At the beginning of the year, Airbus presented the project Vahana, now the group presents a ready-made concept at the Paris aviation fair. The VTVE (vertical take-off and landing) aircraft is to fly completely autonomously. Customers are to reach Vahana four times as fast as ground-based vehicles. Until the alternative means of transportation can be used in everyday life, however, it may take some time.

For the time being, only the concept of Vahana will be presented at the aviation trade fair. Vahana – A working prototype is planned for the end of the year. Until the start of production, it takes even longer: it is expected to bring home the bacon by 2020. Vahana has rotatable rotors so that it can start and land like a helicopter, but on the other hand, it is also capable of flying like an ordinary plane, saving energy.

A newly released video shows how the makers of the project present the flight: The customer specifies his location and the desired destination, shortly afterward the Vahana arrives with him. After the self-safety checks, it calculates the optimal route. After that, the passenger has only to confirm the flight and Vahana flies.

This is the long-term goal of the Vahana project. A flying bus, which is booked via smartphone and then simply at the next heli stop.

In view of these high-flying targets of Airbus, the messages that Ford wants to go in series with its Self-driven cars in 2021 and which already sends a fleet of autonomous vehicles on the streets of Pittsburgh in the coming month is no longer quite as exciting. In Pittsburgh, drivers will still be behind the wheel, but only to intervene in an emergency.

The Vahana automatically detects new obstacles and shares them with other flight drones, so that the customer arrives safely at the destination. With such a futuristic version, Airbus is by no means alone: Uber, German Startup Lilium and Ehang from China are also working on automated flight drones for the transport of passengers. We can, therefore, be curious about which air taxis is the first with a lot of customers.