The Gulf commercial hub has recently announced plans of adding the world’s first office building by using three dimensional printer technology to its collection of attractive buildings. The United Arab Emirates’ minister of Cabinet affairs, Mohammed Al-Gergawi informed that the project is part of an extensive effort by the seven state federations to hold cutting edge technology making it a global hub for innovation. He commented in a statement that the building would be a testimony to the efficiency and creativity of 3D printing technology which is believed to play a major role in reshaping construction and design sectors. The one storey prototype 3D Printed Office Building at Dubai having around 2,000 square feet of floor space would be printed, layer by layer, utilising a 20 foot tall printer and will be assembled thereafter at the site within a few weeks, as revealed by Mohamed Al Gergawi. The interior furniture as well as the structural components would be built via the 3D printing with reinforced concrete, gypsum reinforced with glass fibre as well as plastic, as indicated by al-Gergawi. 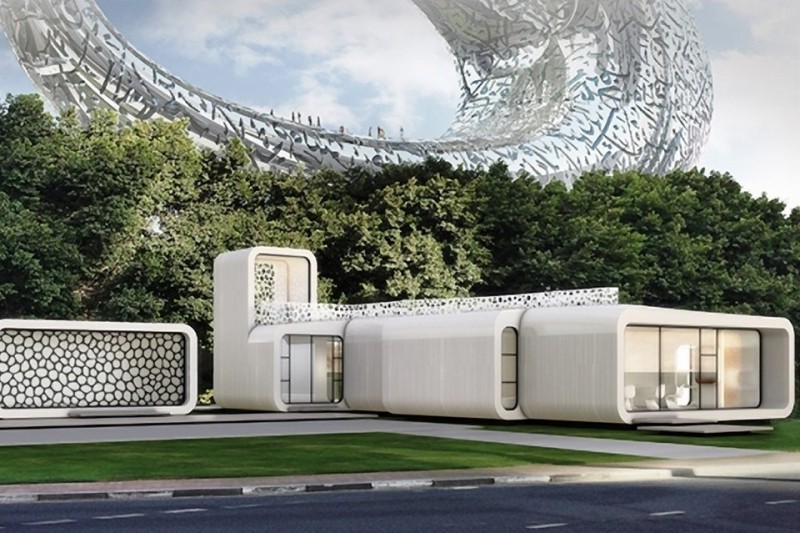 The 3D Printed Office Building project is said to be inpartnership with WinSun Global, a Chinese company that started assembling houses as well as other buildings by using 3D printers and architectural as well as engineering firms namely Gensler, Thornton Thomasetti and Syska Hennessy. Gergawi stated that the 3D printing technology has the capabilities of cutting building construction time by 50 – 70 percent and labour cost by 50 – 80 percent as well as reduce the construction waste that occurs by 30 to 60 percent.

The proposed Dubai office has been described as – the most advanced 3D printed structure that has ever been built at this scale and the first to be put into actual use. Details with regards to time frame or cost has not been revealed as yet. As announced earlier this year, the officials have plan to use the office as a temporary headquarters of a $136 million `Museum of the Future’ and is expected to be opened in 2017. Dubai has been a home to a number of fanciful man-made islands, which include one archipelago portraying a map of the world together with the world’s tallest building, which is 2,717 ft. tall – Buri Khalifa.

The news was released just a month after the UAE had laid out a strategic framework for a new space agency which aims in integrating various arms of the Gulf federations’ expandingspace industry and the seven state federation probably known best for its oil wealth and attractions, is developing fast as the Arab world’s leader with regards to space sector. By presidential decree, the UAE Space Agency was created last year for the purpose of regulating and supports the country’s space sector which comprised of the existing Earth-orbiting satellite programs as well as plans for a mission to Mars in 2020. Khailfa Mohammed Thani al-Rumaithi, Agency Chairman, informed that the space industry would help diversify the country’s economy and also create highly skilled jobs for a population of growing youth.