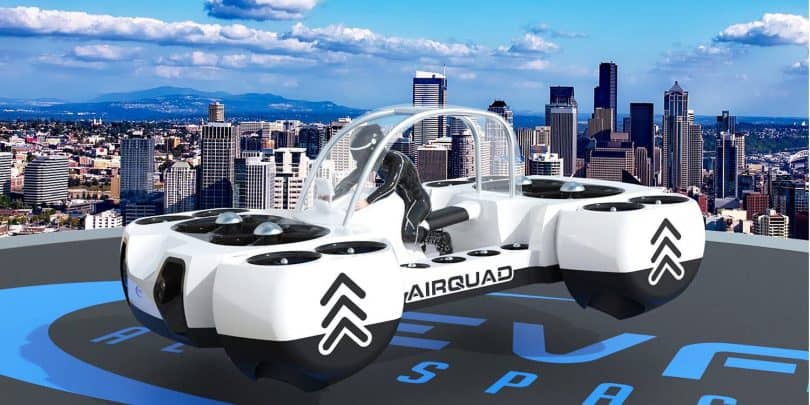 A body of glossy white plastic, the man at the wheel in the spandex suit: The AirQuadOne serves all clichés of the futuristic aircraft. But his makers are serious about it.

The great international aviation exhibition Paris Air Show is a kind of family event of the industry. Every two years, the big and small representatives of the aviation worlds are gathering around the latest concepts, admiring private jets and concluding deals on defenses. Airbus and Boeing, the heads will be hot talking about sales figures of AirQuadOne, while over these heads flyers demonstrate their daring artifacts – for example in the US fighter jet F-35, which will be shown there for the first time publicly.

And because in the past few months all have decided that they want personalized aircraft, there will also be flying cars in Paris.

Neva Aerospace, for example, has one thing to offer. The UK-based consortium of five European companies is currently focused on all types of electronically powered aircraft, from drones to platforms for airborne robots.

Now Neva Aerospace wants to build a passenger vehicle. The AirQuadOne is currently just a concept. But its very appearance makes it a flying car of the future: it is made of glossy white plastic, and the driver wears a spandex suit.

But this concept is refreshingly realistic. The aircraft flies with four electric turbines, which the consortium members have already demonstrated in other vehicles such as drones. It is said to weigh between 400 and 500 kilos, including 150 kilos for the batteries and 100 for the pilot and his quite special purple suit.

AirQuadOne flight time is 30 minutes at 80 kilometers per hour is feasible, says a spokesman for Neva Aerospace. The 40-kilometer range should suffice to get from one side of one clogged city to another. The AirQuadOne will take off and land vertically and you will recharge it like an electric car. In the long term, Neva could add a small motor to power a generator and increase range. This also meant more fuel consumption and more weight. And weight is considered the enemy when it comes to electrically powered aircraft.

The AirQuadOne is the latest in a long line of “flying car” concepts that are suddenly taken seriously by global companies with big names. AirQuadOne wants to transport the passenger soon without pilots in his plane like Vahana. The startup Kitty Hawk, funded by Google founder Larry Page, is working on the flyer, a kind of drone with headquarters. Uber wants to start flying cars in Dubai (where else?) In only three years.

And these companies do not suffer from collective madness. They consider their plans to be feasible mainly because progress in battery technology means that more energy can be put into smaller, lighter packets. New materials give designers the opportunity to paint light but incredibly strong structures and then assemble them from composites.

This does not mean, however, that all the drafts of which we now speak are also put into practice. Lilium proposes a five-passenger aircraft with an almost 320-kilometer range and a crazy top speed of 300 kmh. This is far more ambitious than Neva’s plan – but far from the possibility of ever being implemented.

The real stumbling block for even the more realistic designs are the regulatory requirements. Neva says it is working with American and European regulatory authorities to ensure that it is consistent with the existing rules. But that could not be enough. AirQuadOne and other flying cars will probably need completely new standards. The Federal Aviation Administration of the United States (FAA) has signaled that it is ready to work on it, but the process will take years.

When and whether this is to be reconciled in any way is unclear, however, it is clear that those who want to build such a flight must find what they ultimately expect. There is the idea of private flying machines like this AirQuadOne that bring commuters to work, and potential other possibilities could be prosecution patrols, fire, and rescue services to get to remote areas, oil drilling workers or farmers using the aircraft to control their fields. And then there are all the possibilities that no one of us thinks so far because they only arise with the existence of the flying cars at all.

Aircraft experts estimate that it will take five more years for flying cars like AirQuadOne and Vahana to be developed for real operations. Just enough time to prepare for your own public appearance in the spandex suit.