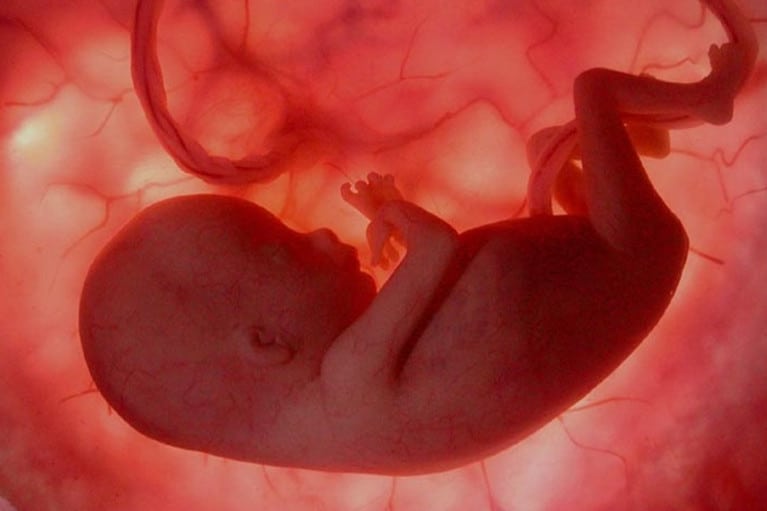 If a baby is born far too early, its organs have not yet matured. Scientists are working on the fact that these children can develop outside the mother’s body: in bags and with the help of artificial placenta.

The Matrix films draw the picture of a future in which people swim in large bags with liquid (Artificial placenta), connected to supply cables and guarded by machines. Aldous Huxley, too, describes in Beautiful New World the ectogenesis – the development of man outside the mother’s body. Is this all pure science fiction?

At the beginning of April, scientists from Philadelphia reported that they had succeeded in raising lambs for several weeks in a so-called bio-day. The animals swam in a plastic bag, became larger over time and even got a coat. But while in Matrix murderous machines have enslaved mankind, the researchers pursue a very different goal: They want to help children born prematurely.

“This technology is aimed at the most preterm babies born between the 23rd and 27th weeks of pregnancy,” says George Mychaliska, who works at the University of Michigan to develop an artificial placenta. In this period, says Mychaliska, the organs are not yet fully developed: “The sooner children are born, the less chance they will survive. And when they survive, they often have long-term health problems, “says Mychaliska. “The techniques we currently have can save children, but they also cause harm.” 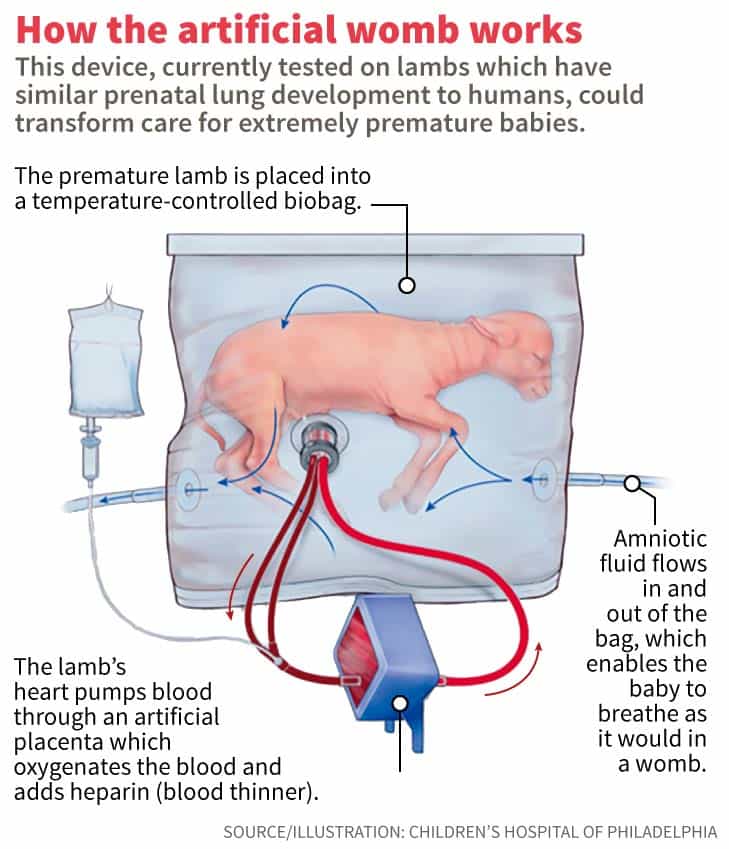 The biggest worry is the lungs: she is not ready to take up oxygen in a 24-week-old baby. Very early-born children are therefore provided with respiratory devices, but this can cause damage. “Children often develop inflammation, for example, due to the pressure of ventilation and the fact that the oxygen is toxic to them,” explains Mark Schoberer, neonatologist at Aachen University Hospital. If one could avoid breathing, the lungs would not be used for six or eight weeks, and if the child was supplied with oxygen and the CO2 was disposed of, it would be “a great advance,” says Christoph Fusch from the Nuremberg Clinic Of McMaster University (Hamilton, Canada).

In other words, what would happen if the pregnancy after childbirth simply went outside the mother’s body? This is precisely the idea behind an artificial placenta. “The surroundings of the mother’s body are imitated,” says Mychaliska. The placenta is a complex organ, all its tasks can not assume the artificial placenta – but a few important, such as the supply of nutrients and the gas exchange, already. Experts agree that the technology that is currently being tested on lambs and piglets is, in principle, also applicable to humans.

In three to five years, the artificial placenta could be tested on human babies

One of the greatest challenges is still the risk of cerebral hemorrhage. The child does not have to eat or breathe in the artificial placenta (as in the mother’s body), but gets the necessary substances from the outside. “However, part of the blood has to leave the body circuit,” explains Fusch. In doing so, the blood begins to change, coagulates, for example. To prevent this, you have to dilute it, which in turn increases the risk of brain hemorrhage. So it is important to find the right balance. Or develop new technologies, such as special tube surfaces that prevent blood clotting.

There are no answers to the question of how the time in the artificial placenta will affect the further development of the child. “I do not know what it means when a child is completely physically separated from the mother,” says Schoberer. “This can have an effect on the neurological development or the attachment to the parents.” For the child in the mother’s body receives many stimuli, it hears the voices of the parents or experiences the movements of the mother.

From premature babies it is known that it has a positive effect when the parents talk with the child, the mother or father can cuddle with him. How is the child growing up in an organic farm? It is not: “Until now, no child has grown up with an artificial placenta,” says Fusch.

Mark Schoberer believes that it is an unusual idea for an organism to approach an artificial placenta.” For the parents, it is a big difference whether they see their child through a bladder, or whether they can get in touch with him and get up One’s own abdomen. “I do not know if we as doctors would go to parents and ask them if they would carry an artificial placenta.”

Among other reasons, George Mychaliska is also working on ways to better estimate the survival probability of a premature baby in the first six hours. “In the first six hours, if you had a 80 percent confidence that the baby would not survive, it would be a very useful piece of information for a clinical trial,” says Mychaliska. For then, in his opinion, it would be ethically justifiable to offer a family the therapy not yet tested for her child.

Could the artificial placenta help children who are born before the 23rd week – for example in the 17th or 18th week of pregnancy – and who have no chance of surviving today? In principle this is possible, says Schoberer. “You could also create a life perspective for children that can not be treated intensively today.” And on the other hand, older children who are ill, whose lungs are not fully developed, for example, could also help. “You do not have to stop at 28 weeks,” says Fusch.

Mychaliska, on the other hand, holds firmly to the limit of 23 weeks – perhaps 22 weeks – before the children are simply too underdeveloped. His research is not about reducing the limit on viability, says Mychaliska. And, “Our group has never thought to imitate the reproduction,” says Mychaliska. “This is not science fiction like in Matrix or Beautiful New World.”

Outside of medicine, the discussion about the social impact of a completely artificial placenta is discussed. What would that mean for same-sex couples or surrogate motherhood? Would they ultimately promote equal rights or make women obsolete?

In the meantime, no one can say with absolute certainty whether the artificial placenta can ultimately prevail. “It could be that the artificial placenta is similar to the in vitro fertilization and – once the taboo has fallen – a very wide spread and the premature born medicine revolutionizes,” says Schoberer. “But the step beyond this threshold is great.”