First Example of Laser Beam – To Lower Temperature of Water

The first laser had been invented in 1960 which has almost always given off heat as a useful tool, a by-product or a fictional way in overcoming interplanetary enemies. However, these concentrated beams of light were unable to cool liquids. Researchers at the University of Washington have come up with a first example of a laser beam which could be utilised in lowering the temperature of water or similar liquids, like saline solution by around 36 degrees Fahrenheit.

The laser refrigeration work was done by a team of researchers including an assistant professor of materials science and engineering, Peter Pauzauskie. He informed UW Today, that `it was really an open question as to whether this Laser Refrigerate could be done because normally water warms when illuminated. Study published online, November 20, was funded by the Air Force Office of Scientific Research and the UW, in the Proceedings of the National Academy of Sciences.

The team utilised an infrared laser in order to cool water which is a main discovery in the field. The infrared laser used by them was to excite electrons in a single microscopic crystal suspended in water which produced an exclusive type of glow which had slightly more energy than the amount of light absorbed. 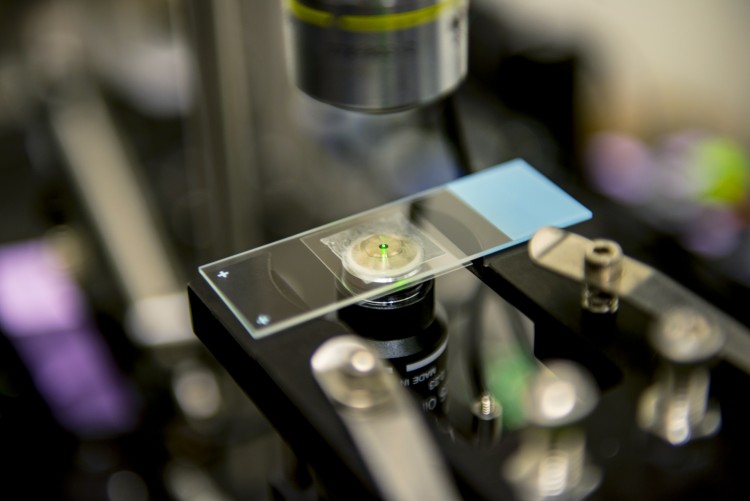 This resulted in the higher energy glow carrying heat away from the crystal with the cooling of the surrounding water. The Laser Refrigerate had first been revealed at Los Alamos National Laboratory back in 1995 which were done in vacuum conditions.

The discovery of UW marks the first time the procedure has been demonstrated in daily conditions. This Laser Refrigerate innovation could be beneficial to industrial users `point cool’ tiny spaces with a focused point of light. For instance, microprocessors would someday use laser beam for cooling specific components in computer chips to avoid overheating, enabling more efficient information process.

The researchers could also use laser beam to accurately cool a part of a cell while it divides or repairs itself basically slowing the rapid processes down and providing researchers with the opportunity of seeing how it tends to work. They could also cool an individual neuron in a network, basically silencing without much damage, to see how its neighbours tend to bypass it and rewire themselves.

All through the experiment, the UW team made use of less expensive alternative for the purpose of growing laser crystals that is a low-cost hydro thermal process which is utilised to manufacture a laser crystal for laser refrigeration. Moreover, the team developed an instrument which utilises a laser trap for holding a single nanocrystal surrounded by liquid, illuminating it with the laser.

Pauzauskie who is also a scientist at the US Department of Energy’s Pacific Northwest National Laboratory in Richland, Washington, had informed that `there is plenty of interest in how cells divide and how molecules and enzymes function and it has never been possible before to refrigerate them to study their properties. Using laser cooling could be possible to prepare slow motion movies of life in action. The advantage is that you do not have to cool the entire cell, which could kill it or change it behaviour’.