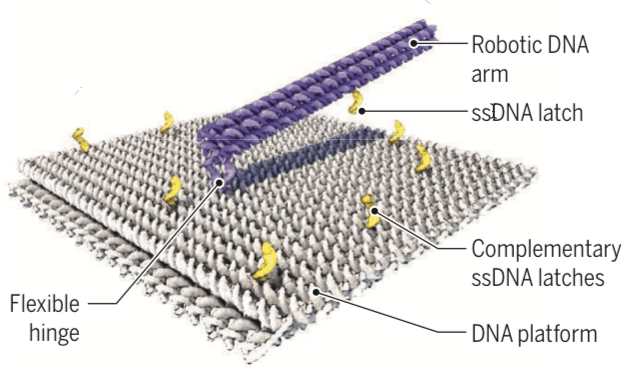 The construction of one of the world’s smallest nanorobot was recently achieved in a laboratory at the Technical University of Munich. Built from synthetic DNA strands, his movements could only be tracked under high-resolution microscopes. An arm of the Nanorobot could be elegantly controlled with electric fields within milliseconds.

As the researchers report in the journal “Science”, such robot systems could in the future be used for the controlled transport of molecules or nanoparticles.  “So far, the drive of DNA nanomachines has been relatively slow over time scales of minutes or even hours,” says Friedrich C. Simmel, head of the working group “Physics of Synthetic Biosystems”. Responsible for the slow pace were biochemical processes that allowed the DNA molecules to selectively alter structure and position. Simmel and his colleagues instead used the fast switchability of electric fields with up to 120 volts of voltage. For example, they were able to move a robotic arm of about 450 nanometers from electrically charged DNA molecules in several directions within a few milliseconds.

To construct the nanorobot, the scientists used the self-assembly, to which the molecular strands of the nucleic bases adenine (A), guanine (G), cytosine (C) and thymine (T) are capable. For example, a robot arm of 25 nanometers in length could be placed on a 55 nanometer square DNA base. This arm could be extended to more than 400 nanometers by docking additional molecules. With several microscopes, Simmel and colleagues first checked the successful construction of their nanorobot and then also the movements filigree via electric fields.  In further experiments, the researchers showed that their nanoscale robotic arm could even touch and move individual molecules or nanoparticles of gold. “We are currently working on several extensions of the system,” says Simmel. Thus, a reliable mechanism is to be developed with which controlled molecules or nano-objects can be taken in one place and deposited again on another. In the future, this technology “hybrid bio-nanoelectromechanical systems” – Bio-NEMS for short – could also be used for highly sensitive sensors or for the targeted control of chemical reactions.