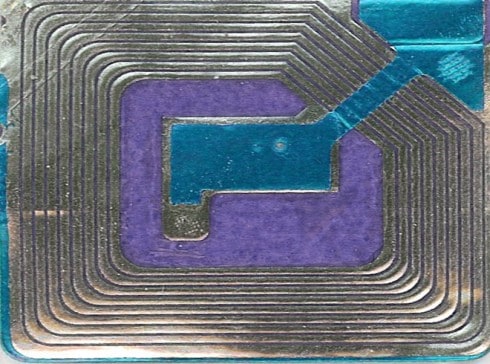 Similar to a barcode system, RFID technology offers companies, warehouses or service providers the best opportunity to observe their goods and products and view their locations.

Recent studies report that many companies use only manual systems for the track and trace of their products. Only large, high-turnover and high-volume companies work with automatic “track and trace” technologies such as RFID. The reason for this is simple: the introduction of such a system is initially time-consuming and quite costly.

An RFID chip consists of a so-called transponder and a reading or receiving device. The transponder can be seen as electronic data storage. It contains all necessary data for the respective product in which it is integrated. If the transponder and the reader are in close proximity to each other, a mutual communication is triggered. For this purpose, both devices have so-called coupling elements in the form of antennas. The following data exchange works by magnetic or sometimes electromagnetic waves.

There are two different types of RFID. These include passive and active RFID. The passive RFID transponder does not have its own electrical power. Only the reader activates the transponder. Disadvantages of passive RFID are the relatively long reading time and the small distance that makes reading possible. Over long distances, it is not possible to read out the data contained in the transponder.

The active RFID, however, has its own electrical power. Reading the data takes only a short time and is possible even over longer distances. In terms of cost, both RFID systems naturally differ immensely.

The difference between RFID and barcodes

Barcodes are the simple predecessor of the highly intelligent RFID solution. The differences between the two systems are shown in the following list.

RFID is being introduced more and more because of its many advantages. However, it will probably never completely replace the bar code label. This is due to the immense cost differences. Therefore, it is sometimes more convenient for smaller companies to use conventional barcodes. The technical progress of RFID systems in some cases does not outweigh the cost aspect.

RFID systems in logistics – here the true advance will happen

Already in the near past, but also in the future, experts in the field are more than unanimous: the logistics industry in particular benefits immensely from the use of RFID systems. Experts already speak of a “revolution in logistics” here. The biggest advantages can be seen in the higher transparency, improved efficiency of the processes and the associated cost savings. “Time is money” – A credo that is nowhere as valid and always will be, as in the logistics industry.

The already mentioned advantage of transparency has grown in recent years to an increasingly important competitive factor. Customers, whether large customers or end customers, would like to know when they can count on their ordered goods. Especially the term “tracking” is elementary. “Where is my product currently located?” Or “How many stations will be delivered before me”. All of these are questions that are becoming more and more obsolete thanks to a sophisticated RFID system. Shipping companies and transport companies in general must work particularly efficiently due to JIT deliveries (just in time), increasingly tough competition and ever more congested traffic routes. Capacities must be used optimally and bottlenecks in the delivery should be recognized in good time and eliminated as quickly as possible.

Against this immense background and this huge competition, especially in logistics, every RFID system becomes a great key factor that needs to be checked for relevance and profitability for one’s own company.

RFID – disadvantages that should be corrected in the future

There are currently many technical problems with the introduction of RFID systems. It is often problematic for that alone, because there are no standards for worldwide free frequencies, for example. Cross-border networking of goods is therefore often not possible. Logistically speaking, unified systems would offer a huge advantage.

Also, it is more common for the collection of large quantities of goods to read errors. A high error rate can always be recognized if, for example, the transponder and the reader are used by different manufacturers. The compatibility that is desired by the user, is not yet made available among the various manufacturers.

Another problem that should be ruled out in the future is the radiation that is harmful to health, which arises especially at high ranges and therefore emanate from an active RFID system.

Prices of up to 25 cents for active RFID transponders are currently too high for many companies. A widespread use of RFID systems is therefore currently not possible. In production companies, for example, a positive ROI (return of investment) is only achieved with a certain minimum size. The point, then, where such a system is financially affordable.

The transition to RFID systems, as practical and advantageous as they are, is currently only worthwhile for large companies, and in the near future as well. Just those that can shine with correspondingly high numbers and speeds.

One thing is certain: this systems are the future and will be integrated more and more. In many years, a worldwide network of this systems would be particularly advantageous in order to eradicate the still prevailing intercontinental disturbances during use.