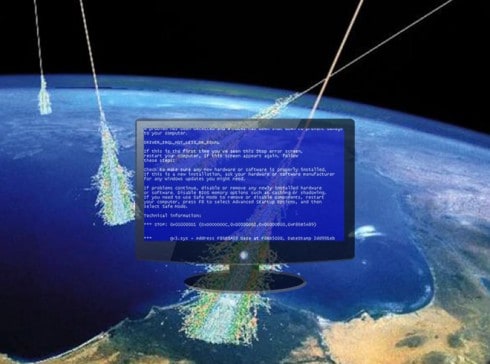 Researchers could prove, the energetic particles of the cosmic radiation can change individual bits and thus computers and smartphones to crash. Since the Earth’s magnetic field shields most of the cosmic rays, we are relatively well protected from it on our planet. However, again and again, cosmic particles pass through the magnetic field and then collide with gas molecules in the atmosphere, generating high-energy secondary cosmic particles such as alpha particles, muons, neutrons, and even Higgs bosons.

Every second, several billion particles hit or fly every square centimeter of the Earth’s surface and everything that can be found on it. However, most particles do not react with the molecules they encounter. However, researchers at Vanderbilt University in Nashville have now found that if these particles hit electronic devices, fatal errors and system crashes can occur.

Such a cosmic hit in an electronic device can cause a bit to jump over in digital code – from 0 to 1 or vice versa. IT experts are talking about a single-event upset or SEU for short. The problem with such an incident is that if a critical bit is changed, it can lead to system errors or even whole system failures.  These bit changes happen every day – several times. For example, in 2003, a bit was changed in a voting computer in the Belgian municipality of Schaerbeek. By mistake, one voter mistakenly had 4,000 votes. In 2008, a changed bit in an airplane caused an error in the autopilot. The airliner was thus 23 seconds in the dive. A good third of the passengers were injured. To give an example of how often a SEU happens, a study from 2004 is suitable. Thus, a small server farm can jump a bit every 17 hours. At high altitude, for example in an airplane even every five hours.

If you think smaller chips are harder to hit, you’re wrong. The disadvantage of smaller chips is that less energy is needed to change one bit. And also the observations of the last years show: The smaller the microchips become, the faster bits are changed by the cosmic radiation. Although the 3D architecture of most 16-nanometer chips reduces the number of SEUs, the number of transistors in most devices increases, which still increases the error rate.  Aviation, aerospace and military are currently upgrading to redundancies with new radiation protection measures. So you want to avoid critical system errors in the future.