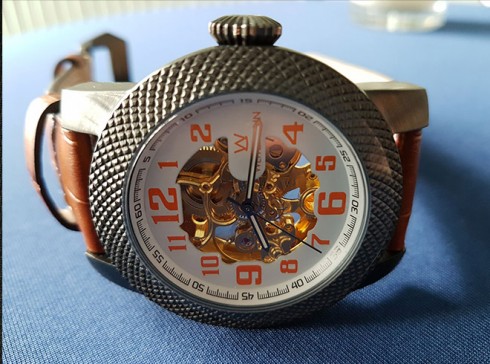 Recent research in the field of silicon technology and quartz processing enable modern watches of the highest quality, which run to the millisecond exactly.

Manufacturers of high-quality watches are not only interested in optically appealing watches, such as partially transparent skeleton watches to make, but they are synonymous with the quality and the precision of the movement located. Recent fundamental research at the e Paris-Sorbonne University has revolutionized the production of quartz crystals. As a result, it is now possible to produce highly precise wristwatches, which are accurate to the millisecond, at low cost.

The French scientists have found a way to grow structured quartz crystals inexpensively and simply on wafer-thin silicon layers. To do this, the scientists dipped a silicon carrier into a solution of bromides, strontium and barium salts as well as silanes. Using a process which experts call devitrification, alpha-quartz crystals are formed. Due to their extremely high quality, these are ideal as quartz crystals for extremely accurate running clocks.

The grown quartz crystals can be influenced in their structure. The smaller and more precisely structured the crystals are, the more accurate movements are made possible by them.

In the past, in 2006, Finnish scientists have made a real breakthrough in silicon technology by developing a highly accurate and reliable silicon-based microresonator. At the time, this technical component was a milestone in wireless radio technology and today it has become an integral part of electronic devices such as smartphones, navigation systems, computers and satellites. The combination of this microresonator and the ultrastructured oscillating crystals enable wristwatches that work exactly to the millisecond.

Otto Weitzmann AG is already looking forward to the new generations of exclusive watches because they know the value that buyers of luxury chronographs attach to a high-precision movement: “Some of our customers prefer very exclusive watches. Through various personal conversations we know that the new movements are very well received by this clientele. Quality is very important here and of course this should apply to the movement. ”

Until then, the French scientists are still working on a refined version of the quartz crystal production, with the aim of breeding even finer structured quartz.