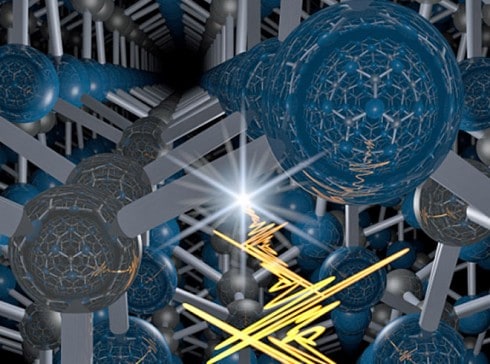 Traditional silicon chips in computers can be replaced by crystals in the future. In conjunction with state-of-the-art laser technology, unparalleled performance increases are possible.

Traditional computers work with silicon chips. For decades, these have become increasingly efficient – but now seems the limit of the performance of such products to be exhausted.

Researchers from the Universities of Michigan, Regensburg and Marburg have therefore taken a new direction: they investigated the conductivity of crystals. They found that when you use crystals of gallium selenide, no waste heat is generated. When electrons pass through silicon semiconductors, some of them always collide with each other. However, this is not the case with crystalline semiconductors.

By means of short laser pulses, which occur at intervals of less than 100 femtoseconds, the energy state of the electrons is increased, whereby they move on. The orientation of the crystal to the light beam in this case determines the direction of movement of the electrons, which can also be changed within a crystal. When the electrons fall back to a lower energy state, they in turn emit light pulses. As a result, information can be written to other electrons or data records can be read out. Also in this process, the position of the crystals in terms of the laser beams is crucial.

This method not only ensures that computers do not run hot anymore. Above all, it increases the working speed many times over. Calculating machines are still working with binary codes, ie states 0 and 1. However, the new technology will allow it in the future to get rid of this restriction. Due to the high speed of the laser, an electron can also be irradiated between two energetic states. It is thus arbitrarily manipulated and can be used as a qubit. The system is suitable as a basis for quantum computers.

However, it will probably take a few years before the new research results can be technically implemented. Rupert Huber from the University of Regensburg, who led the research project, however, emphasized the enormous potential of this discovery: his research group had “discovered that it is possible to move electrons with light pulses through crystals.” This system can be used to create computers of unknown speed which are ten to a hundred thousand times faster than today. “, according to the researchers in the journal Nature.