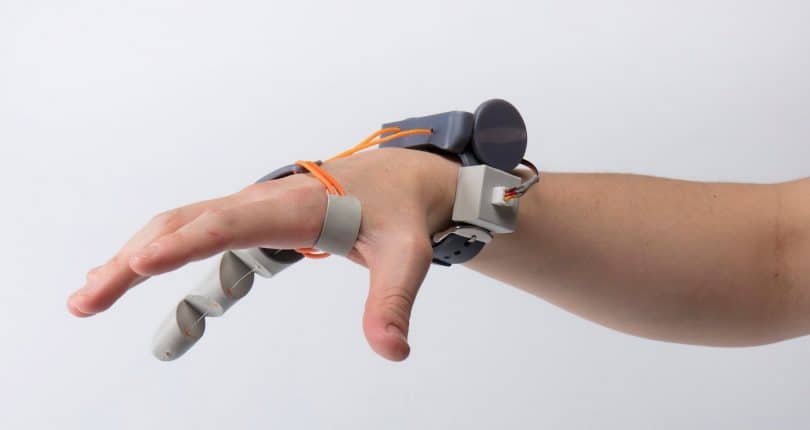 What can be done with the third thumb on the other side of the hand and how does an additional counter-grip change the body feeling? A student of the Royal College of Art in London has developed a robot thumb. It is intended to extend the natural abilities of the human hand and reduce prejudice against prostheses. With the third thumb, an iPad can be operated with one hand and play the guitar in an impossible way.

The thumb is the strongest finger on our hand. Thanks to it, it was possible for our ancestors to take hold of poles, fistlocks and hammers and axes. What would be possible in the future with a second thumb at hand? This questioned Dani Clode, a student of the Royal College of Art in London, who developed the same. The third thumb sits like a prosthesis next to the little finger on the right hand and is to “explore the reaction of people to artificial extensions”.

London-based designer Dani Clode would like to help people get a better grip on things and has built the prototypes of a third thumb. Grab the free side of one hand, opposite the existing thumb, and control the movements via pressure sensors that are operated with the toes. The sensors and batteries for this are integrated into the shoes, Bluetooth ensures the wireless transmission of the signals.

The actual artificial third thumb consists of three segments, which according to Dani Clode on a 3D printer made from the flexible material Ninjaflex. This material of the third thumb is available in different degrees of softness – the designer used the variant with hardness according to Shore-A of 85 for its prototypes. Such filament can also be used (depending on the design) on cheap FDM-3D printers. The additional gripper is moved by wire bowden cables, which run in Teflon tubes. As actuators, two servos are mounted on a bracelet, which in turn comes from a stereolithography 3D printer from Formlabs. It is fastened to a bracelet in which servomotors and batteries are housed, which bend, stretch, and incline the thumbs. “The engines are controlled by two pressure sensors, which are placed under the toes in the shoes,” explains Clode. “The communication with the third thumb is by means of a Bluetooth connection.” This is a very natural way of controlling since we also intuitively adjust the movements of the hands with those of the feet when driving a car or playing the piano.

What makes the third thumb of everything possible is shown by a video, for which Clode various people tested the prosthesis. For example, an iPad can be operated with just one hand, or a guitar can be played in a manner that is not yet complex. This makes possible handles which are otherwise unthinkable. The same is true for piano players, who can reach wider keys.

As Dani Clode explains, however, it is mainly about changing our image of prostheses. The third thumb is thus both tool, experience, and thought-provoking. For prostheses could not only compensate for lost limbs or disabilities. They could also expand the previous physical functions.