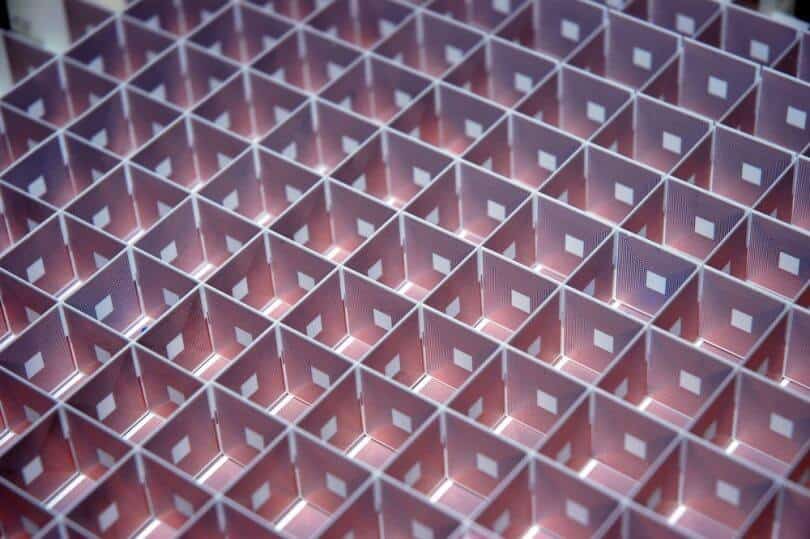 An optical metamaterial can increase resolution or even pass light around objects. So far, one has struggled with the wavelengths of visible light and high attenuation effects.

More recently developed translucent composites seem to turn the laws of optics upside down; because they break the light in a different way than you would expect. From these so-called metamaterials, one could make perfect lenses with a hitherto impossible resolving power, or even make camouflage coats that make an object invisible by directing the light around it. However, previous metamaterials were either too coarse for visible light or attenuated the light too much – or they were only available as extremely thin layers, which do not allow a three-dimensional deflection required for practical applications. Researchers at the University of California at Berkeley have now overcome these difficulties with two new composites.

The two metamaterials developed by Xiang Zhang and his colleagues, who have made the leap to the third dimension, broke visible or infrared light rays in the “wrong” direction, without significantly weakening them. In the refraction of light, a ray of light that passes from one transparent substance to another changes its direction. For example, a beam that enters the water at an angle from the air is refracted towards the entrance slot. This leads, among other things, to the fact that a straight rod, which projects diagonally out of a clear pond, appears bent. In metamaterials, on the other hand, the light is refracted beyond the perpendicular, so that the beam does not cut the solder but instead reflects it. For the first time, researchers were able to observe this unorthodox refraction of light for visible or infrared light.

In the silver lattice

The first metamaterial consists of numerous parallel, 60 nanometer thick silver wires embedded in alumina. The spacing of the wires is smaller than the wavelength of the light, so that the light can not dissolve the fine structure of the material and therefore finds a homogeneous substrate with new properties. As the researchers report in the current issue of Science magazine, they obtained the material by etching many thin channels into an alumina block and electroplating it with silver. They determined the optical properties with a polarized red light beam of 660 nanometers wavelength, which they dropped obliquely onto a layer of material approximately 20 light-wavelengths thick. They watched as he was distracted. If the beam was so polarized that its electric field swung perpendicular to the wires, it was normally broken. However, if his magnetic field was perpendicular to the wires, his electric field in the wires could excite electric oscillations that were in the opposite direction, breaking him several degrees in the wrong direction.

The second metamaterial was able to deflect randomly polarized infrared light in the wrong direction if its wavelength was greater than 1.5 microns, as the researchers report in the online edition of the journal Nature. It consists of a total of 21 magnesium fluoride and silver layers of 50 and 30 nanometers thickness, which are alternately stacked. The layers are perforated and have a regular fishnet structure, in the broad, parallel strips are connected by narrow webs. The layer structure had been produced by alternating vapor deposition of silver and magnesium fluoride on a substrate.

The researchers had cut the fishnet pattern into the layer structure using ion beams. When the metamaterial was irradiated with infrared light, its electric and magnetic fields excited electrical vibrations in the webs and magnetic vibrations in the stripes. Together, these vibrations counteracted both the electric and the magnetic field. This gave the metamaterial a negative refractive index while natural substances always have a positive refractive index.

In a negative refractive index material, an incident light wave excites a wave that moves toward it. Among other things, this leads to the fact that the light is broken in the wrong direction – regardless of its polarization. The metamaterial with fishnet structure had this property. To demonstrate this, the researchers made a wedge-shaped prism with a tilt angle of five degrees from this material. When the wavelength of the laser beam was gradually increased from 1.2 microns to 1.8 microns, the refracted beam slowly moved in the wrong direction.

The measurements showed that the refractive index decreased from 0.6 to -1.2. The resulting low absorption losses can be further reduced by improving the structure of the metamaterial. The unusual optical properties of the two new metamaterials open up many application possibilities, although the production of perfect lenses or camouflage coats could take a while.