Swiss-made solar powered plane – Solar Impulse 2, recently took off crossing 8,172 kilometres, from Japan on the seventh leg of its journey across the Pacific Ocean which was expected to be the world’s longest solar flight in terms of distance and duration.The plane piloted by Swiss pilot Andre Borschberg has a 72m wingspan which is bigger than a Boeing, to carry more than 17,000 solar cells that are essential to supply power with its electric motors.

The solar cells recharge four lithium polymer batteries which enable the aircraft to fly during night. Departure of the aircraft had been delayed several times due to bad weather conditions while the first 10 hours of flight, according to organisers was difficult due to technical problems. Co-founder of the aircraft, Borschberg stated before taking off, that the trans-Pacific crossing was the `moment of truth’ for the solar powered plane.

`It is where everything comes together, the engineers who worked on the airplane for the last 12 years, the mission control centre who would have to predict weather and guide the airplane through good conditions and Bertrand Piccard who had this vision 16 years ago of an airplane flying for days without fuel to change our mind-set regarding the potential of clean technologies and renewable energies’. 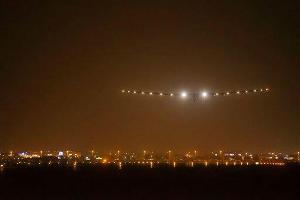 One Way Ticket to Hawaii

The Solar Impulse 2 which had left Nanjing, China on 31 May for Hawaii was forced to reduce its bid a day later due to `wall of clouds’, as termed by pilot Andre Borschberg, over the Pacific and land in the central Japanese city of Nagoya. Departure of this plane was postponed many times due to bad weather, once last week with the plane bearing 17,000 solar cells across its wingspan was on standby towards the end of the runway.

Eight hours after the Solar Impulse 2’s pre-dawn departure, organisers on their website had commented that `this is a one-way ticket to Hawaii. Andre Borschberg must now see these five days, five night’s flight through to the end’. The Solar Impulse 2 is considered to be a lightweight aircraft which is driven by four electric propellers with banks of solar panels on top of its wings and fuselage. The plane is only as heavy as a family car though has a wingspan which is huge as the largest passenger airline.

The trans-Pacific flight is said to be a `real-life test for the pilot as well as pushing the limits of the aircraft to new levels. Successful arrival in Hawaii would show that the impossible can be achieved. The plane is likely to take around 120 hours to cover the distance of 7200km.

The pilot would be living in the tiny 3.8m*3 cockpit and as stated by organisers `maintaining his confidence that the energy collected from the sun throughout the day would last through the night’.Research design and the construction took around 12 years where the first version of the craft that rolled out in 2009, broke records for height and the distance travelled by manned solar plane.

It had taken shelter on June 1, at the Nagoya city airport which is also known as Komaki Airport part way through the flight from Nanjing, China to Hawaii. The aircraft Solar Impulse 2 had taken off from Abu Dhabi in March on the 35,000km round the world trip and is expected to cover around 25 flight days with breakup of 12 legs at speeds between 50 and 100Km per hour.