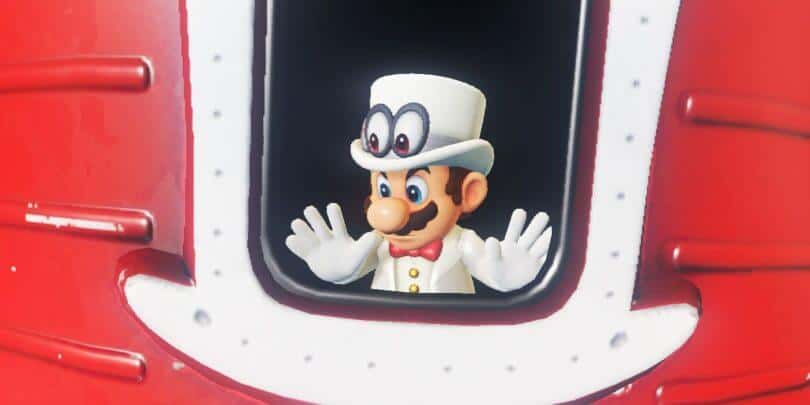 The new Super Mario is a 3D platformer in the style of Super Mario 64. However, with a new gimmick: the former plumber can take control of his opponents and friends with his cap. A mechanic that is not really enthusiastic.

Mario throws his cap. On a dog, a dinosaur, a fireball or even on a well hung ham. No matter how absurd the object may be, Mario can hatch through his hat into other bodies and stomp through the world as a powerful Tyrannosaurus or as a piece of meat. The world of Super Mario Odyssey is an extremely dystopian place when the former plumber penetrates the spirit of his enemies and friends to let them dance to his pipe. And then throwing them away like a cheap disposable raincoat after getting what he wants.

And what does Mario want? Moons to fire his spaceship. This time he chases for the umpteenth time to his creator Bowser, who once again kidnapped his girlfriend Peach – this time is to be married. So, at first glance, Mario has not changed much when Mario is bouncing through the levels in Super Mario 64, and the show is still running. Because the game does not really know what it wants to be and always hits two different directions, which can not be reconciled.

At the center of the game is the new super cap Cappy, with which Mario can take over almost everything. He gets new abilities: Mario can swim through lava, the other time indestructible blocks crumble. Whenever Mario discovers a new opponent he can take, somewhere a moon is hidden, which Mario can only reach in this state. These moments present themselves as small puzzles and minor examples. With a solution, which can be seen immediately in almost all cases: As a fireball, we can swim through a strip of lava, at the end of which a moon waits. If we destroy the right blocks in the shape of the T-Rex, then a moon jumps out of one. And if we have collected enough moons, Mario can disappear into the next world with his spaceship.

As soon as we get used to this formula, it becomes a routine: discovering a new object or an opponent to take over? Then it is said, look where the nearby moon is hidden. Super Mario Odyssey is thus becoming a kind of game collection whose shortcuts are linked by short open-world segments.

A total of 14 worlds should be visited in the normal run – more can be discovered later. We walk through usually manageable levels in the search for the next Example, sometimes the moons but also just somewhere in the way. What motivates us is not the enthusiasm for the puzzles – their solutions are usually banal – but the Collecting Side shaft and the desire, with enough moons finally discover the next world.

The further we come, the more sophisticated platforming episodes the game has to offer. Multiple rotating planes, which must be jumped in perfect timing. But not always in the form of a creature taken over by hat, but as the good old Mario. At the end of an episode, a single moon is waiting. If you only want to see the end of the game, you can skip it. In such platforming levels, Super Mario Odyssey always comes back to the roots of the series, reminding you of the more difficult levels of the classic Super Mario 64.

It quickly becomes clear that Odyssey wants to be two things at the same time: On the one hand, there is the light-footed and simple Open World game, which concentrates entirely on the caps mechanics and is rather the discovery in the center. And on the other hand, Odyssey cannot let go, too, to grab crisp jump-and-run action. However, both have the effect of a contradiction. Especially in the platforming segments, the cap plays only a minor role.

Even though the new Super Mario has been made with a lot of attention to detail, it seems like a lost opportunity. It feels like two games that have been put together but do not give a homogeneous whole: While we are annoyed at the platforming segments to the incandescence about the difficult maneuvers, the caprices are so simple that they often feel boring and banal. They are a job that needs to be done so the game can go on.

Similar annoying collective marathons are known from other Open World games. However, it becomes particularly frustrating after the credits, when we learn that there are other worlds to discover. For the rich now but not more than 20 moons, but more than 200 must be found. The motivation continues to end quickly.

As boring and old-fashioned as the traditional setup is of the princess to be saved, this idea is undermined at the end of the game with a wink. We had the feeling that even Nintendo noticed how stereotypical and sexistically their own characters had always been. And how urgently the heroic Mario and the helpless Princess Peach need an update. In Mario & Rabbids: Kingdom Battle was already seen similar to Peach with dress, pumpgun and a bold slogan on the lips came to rescue the boys from a predicament. A refreshing development for the Mushroom-Kingdom, and should be expanded urgently.

Super Mario Odyssey is a lot of fun, but it is not the perfect 3D Mario sequel that many fans have wished for. Although we spent a few hours searching the moons, the game developed more and more into the collective organ without long-term motivation. We would have liked more of Marios cap – or less. For one of them Nintendo should have decided.