At fringes of the 2015 a number of tech products became quite popular for gifting purposes. Hoverboard became excessively popular along with the drones but US regulatory agencies were quick enough to issue a list of instructions and guidance manual to infuse legal usage of drones.

At CES one of its kind and presumably the world’s first Flying Drone tax was unveiled and it will certainly give a boost to the popularity of drones to a great extent. This drone is called EHang which remains aloft being powered by eight propellers. Passengers can easily climb in it and relax while the drone takes to their destination with slow humming sound.

Features of the EHang

The EHang as said earlier is powered by the eight powerful propellers and it also has a unique on board system which helps in preventing the drone from colliding with other aircrafts as well as buildings. Developers had provided an emergency system which allows this drone to temporarily hover at one spot in the air in case of any kind of emergency found on the ground.

A brief history of EHang

EHang CEO Huazhi HU had started designing and developing one-seater drones after two of his pilot friends met a bad accident which took their life in plane crash. Since then he had decided to develop such a kind of air transport which can easily take people from short to medium distances without the use obtaining any pilots license. EHang was founded in 2014 and it has been working aggressively to raise substantial funds which currently stand at $50 million. 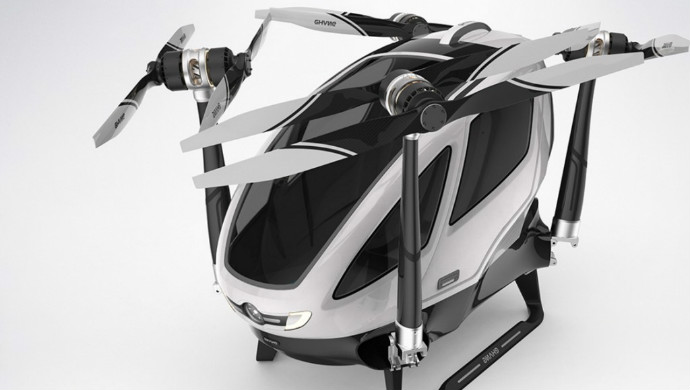 The idea behind developing EHand drone

EHang is result of this idea where users can easily get into the drone, power it up and simply select the destination where he wishes to reach. EHang has a 12 inch touchscreen display which has simple controls for choosing the destination and a simple click on ‘take-off’ button will initiate the ride.

EHang comes with an automated flight system which overtakes the control of the ride from there and it efficiently manages various tasks like handling communication with air traffic control, adjusting the course of navigation and avoiding the obstacle on the route. It even has a emergency system which take over the in case of any malfunctions.

The futures prospects of this transport vehicle

The EHang executives were quite upbeat about the drone and they are optimist that it could turn out to be the most favored mode of personal transport. EHang boasts of an ability of carrying single passenger for 23 minutes hovering at a speed of 60mph. It features gull wing doors and arms which fold up and it has amazing design which seems like a fusion of futuristic copters.

EHang can easily be fully charged within two hours. The user based inputs are quite limited as they can only set the destination which will ensure a safer ride devoid of any human error. However the EHang is basically a prototype and it will still several years before they can go in mass production given the fact it gets approved by the authorities.