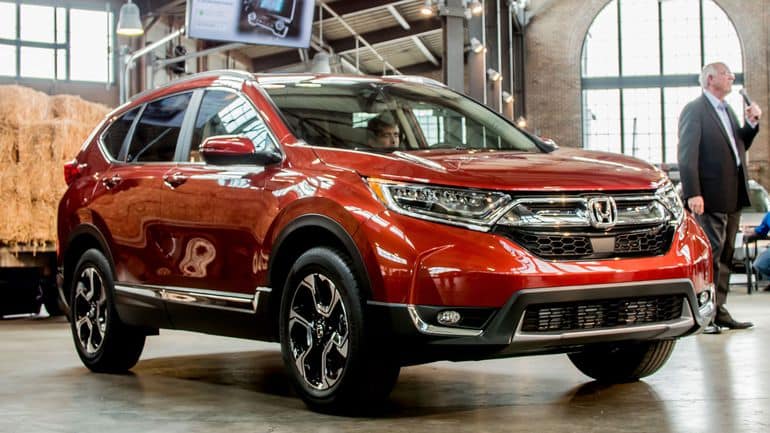 Honda a well known automobile company has been excelling in re-launching its existing models in a well updated and very modern. On this way comes the new Honda CR-V with a new and improved turbocharged power engine and a heavily updated chassis which expands the Honda CR-V’s body dimension and puts an modern look on it.

The suspension has been improved to handle both ride quality and the vehicle handling smoothly and this has been made to go along the crossover ability. There has been many feature added in the new 2017 Honda CR-V’s.

The new fifth generation has been updated and boosted more powerfully compared to the previous generation. This new model will be set as a benchmark for other generation yet to be made.

One of the major updates in this car is its new turbo charged engine. The new 2.4 liter turbocharged four cylinder engines which are quite powerful compared to the other version and produces 184 horse powers.

This version engine is quieter and with full increased power of the engine it still is very comfortable to drive around on and off road. The previous version of the Honda CR-V was quite good and was an best in its class before and after the fifth generation CR-V which now seems the best over the previous generation.

The new updated new model provides the new 2017 Honda CR-V with a new muscular and modern look. The day time running lights have been updated with a new look. The very detail made in this car by the Honda Company has to very much note. Overall the body is quite updated and modern but it still has some things carried down from its previous versions.

The new 2017 Honda CR-V’s new Cabin has been updated fully from the flooring to the top. The dashboard has been totally updated and the quality of the materials has also been updated. The one of the disadvantage is the big bulky gear shifter that has been fitted in the car.

This gear shifter indeed spoils the look of the interior Honda really has to update the gear shifter which must be made very simple, light and look great on hands.

There has been an increase in the cargo space of 39.2 cubic feet without the seats put down and 75.8 cubic feet with the second seat folded. Now the passenger’s seat now has two extra inches of legroom compared to the previous versions

The twin meters with digital gauge cluster on the EX model and above are very easy to reach and to read. One of the disadvantages is that the temperature gauges as well as the gas gauge use small bars that light up instead up of readout or a small dial which makes us quite difficult to view and read.

The new 2017 Honda CR-V is made for an ideal person who wants to enjoy more of an sedan and use it as an SUV this vehicle is quite powerful among its competitors which keeps an pressure on the company to give its best every time they launch a new product.