In an inventive but hard hitting way of informing people on the increasing refugee catastrophe in Europe, Google has launched an awareness project by developing this fake site to inform people about their future. Known as Google Fortune Telling – Predict your future, the Google Fortune Telling which is in beta, prompts the user to edit in a query related to the future and after selecting a question you could click on the `predict my future’ After the question has been asked, the site tends to load a message stating `Of course we can’t predict your future but 60 million refugees ask themselves daily if they have a future at all.

So a fake Google site has been used to draw attention since you were interested in your own future. Please take a moment to think of their future’. Google desires to bring about an awareness regarding the million refugees who are not sure about their future and whether they would be accepted without any discrimination in the world. Human tendency is such that irrespective of how we feel with regards to our future, there seems to be some curiosity lurking behind our mind of what lies ahead for each one of, in the future. 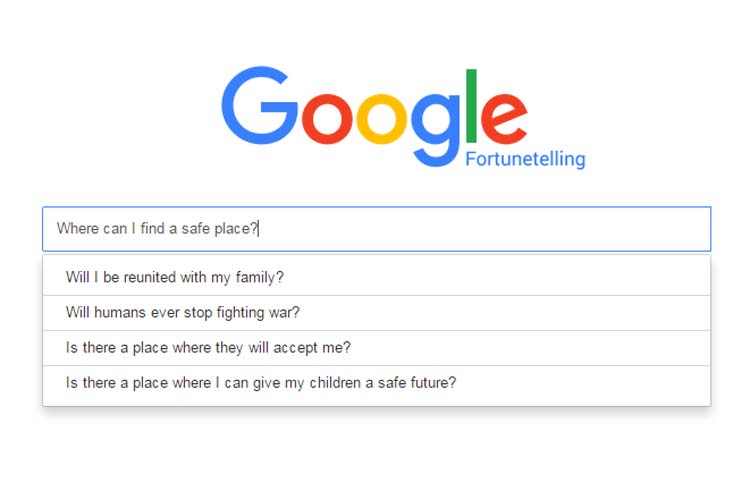 A crystal ball images seems to appear and counts on the number of people becoming new refugees, recommending users to donate to the United Nations High Commissioner for the Refugees. The hook is that this site is not associated with Google in any way and the domain has been registered to a Netherlands party. The Interface of the Google Fortune Telling site is similar to Google’s homepage and the new company logo of Google has been utilised to draw more audience towards it.

The Google Fortune Telling site tends to match the user with some charity organizations wherein users could donate generously for a worthy cause. Other outlets and Blue Sky had reported on the site that imitated the accustomed Google search page but recommended questions like `where can I find a safe place or `will I be reunited with my family?’Google has inspired users to inform their friends regarding this campaign, to check on local initiatives or to donate to any of the charity organisations. 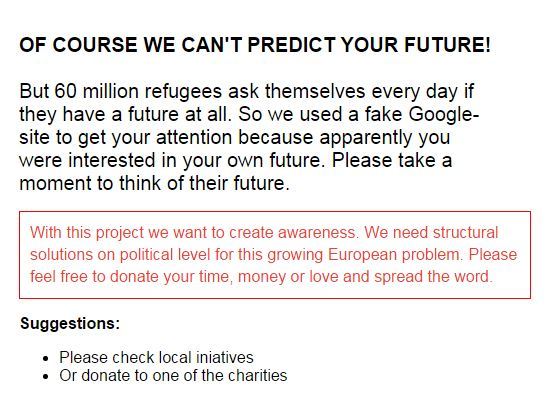 This Google Fortune Telling project has been created with the refugees in mind, where thousands of them are said to be fleeing to Europe from war torn locations like Afghanistan, Syria, Iraq, Libya and Yemen not knowing what the future holds in store for them. As per DigiDay, Netherlands based creative communications agency, a confirmation has been given by BrainMedia that they were responsible for the site that connects to the donation page of UNHCR, the United Nations Refugee Agency.

The Google Fortune Telling website has links to aid with efforts to deal with Europe’s present refugees and the migrant calamity. The owner of BrainMedia, Jort Boot, had stated that `the campaign has been very successful, all over the world now and it is amazing. They are happy that people seem to be caring about this problem and are sharing it as well as creating awareness all across the world’. The website is urging users to help the refugees by way of time or money to charities and also asking them to create awareness regarding the campaign through their social networking sites like Twitter and Facebook.