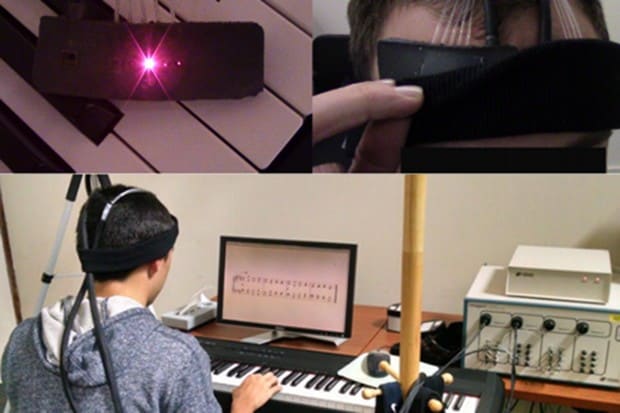 A new system – Brain Automated Chorales or BACh has been developed at Tufts University which tends to teach inexperienced piano players more proficiently by scanning their brains while playing and adjusts the difficulty of lessons depending on their performance. Researchers state that they have found out that learners tend to play with significant increase in accuracy as well as speed in the brain-based adaptive task compared to their control condition. They can play with much faster speed with BACh compared to a control when they tend to learn the way they normally would play.

BACh utilises functional Near Infrared Spectroscopy – fNIRS, which is a non-invasive brain monitoring system in measuring oxygen levels in the prefrontal cortex, an area connected to planning, memory and the learning of new tasks. When the brain tends to work hard, the oxygen level increases to facilitate all that extra processing and based on how challenged or up-to-speed, the volunteer was with the material, the BACh computer program tends to serve it an easier or harder task. If the volunteer is struggling and hating life, the system would know and support you through the part where you could be stuck and serve up new information when the brain can manage it.

There are shortcomings though comprising the size, wherein the equipment is about as big as some of the stacked shoeboxes. Some people tend to belief that learning a real instrument could be hard, but the new brain scanning system is helpful in making the leap to playing genuine music. The system had been tested on 16 inexperienced piano players who were given the task with learning two Bach chorales of same style and difficulty.

They spent 15 minutes for one of the pieces, learning it with the help of BACh that served up the soprano line first and when the brain scan portrayed that they were ready for more, it served up the bass, alto and tenor parts. The other chorale was offered without the program and the participants were trained to learn the piece as they normally would learn. The order of the two learning methods was exchanged between the participants.

When they had utilised both learning systems, they were asked to play a piece each once all the way through, the best way they could. Performance data from both were recorded inclusive of how many correct notes were played, how many incorrect notes were made and the number of extra notes, missed notes together with playing speed.

Can Be Applied to Various Skills

The team behind this system discovered that individuals could play pieces considerably better than through traditional teaching method, though they had only used it for fifteen minutes. The team behind this technology state that it could be applied to a range of various skills, inclusive of maths, learning foreign languages, reading and programming.

Participants played correct notes, missed few notes and made fewer errors while using the system. Moreover they also played faster, had less gaps between notes and higher BPM. Other systems comprising of commercially available video games tend to utilise same method to learn to play in real time and change a lesson to reflect one’s capability, though with the absence of a direct link to the brain.

The team expect that the technology would be applied to various skills such as maths, reading and foreign languages, teaching the system in monitoring certain emotion for if the person is frustrated, happy or bored, it would be able to adjust the lesson with accuracy.