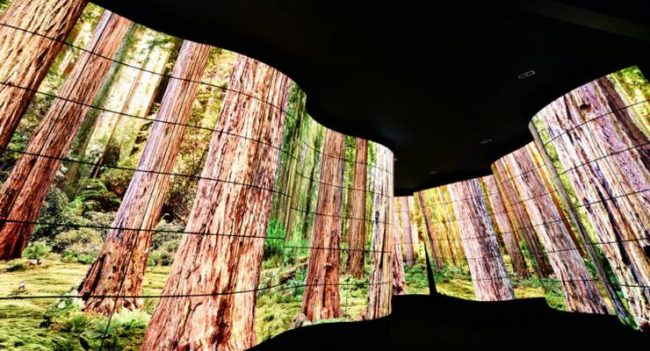 The CES is still a television fair. Although the electronics industry is now experimenting with augmented reality, autonomous cars and networked home appliances, in the end everything revolves around the big screen in Las Vegas.

The 2018 vintage TV sets essentially follow the well-known trends: everything is a little more opulent and sharper, and wherever you look you’ll find new, unfathomable shortcuts for features that are supposed to get people to finally get themselves a new TV to buy.

But no matter if you really want to miss an upgrade to the screen in the living room or not, the new TVs that will be presented at CES this year will give you a good idea of where the technology industry is going.

After all, televisions are no longer just for television: they serve as the central interface for the smart home and virtual assistants. They are game consoles and powerful calculators. And while the TV goes over to take over the functions of other devices, they do exactly the same thing.

With every device in the home now having enough power for work, gaming or entertainment, the distinctions between categories are blurred to insignificance: basically, all gadgets have become screens – televisions in all shapes and sizes.

There is no better example of this than the new prototype of a flexible, wall-filling display that LG presented at CES. The screen measures 65 inches (1.65 meters) diagonally and stands in the room, at least until the end of the television is over – then he can roll at the touch of a button like a slide and retires back into its housing.

The screen measures 65 inches (1.65 meters) diagonally and stands in the room, at least until the end of the television is over – then he can roll at the touch of a button like a slide and retires back into its housing.

Depending on your needs, the display can disappear completely into the white box, either for storage or for easy transport – or let it protrude a bit so that part of the screen remains visible. The result is a narrow bar with widgets showing the weather forecast, sports scores and other information.

Strictly speaking, this novice from LG has virtually nothing in common with conventional TV sets – except for the screen size. In terms of functions, the roll-up TV is more like a huge tablet. So what is this thing?

Throughout CES, companies are showing televisions whose performance goes far beyond many, many pixels. Samsung sees in his TV devices now a smart home object among many. Accordingly, you can control the TV via the SmartThings app, as well as thermostats or room lighting.

Other manufacturers rely on Android for smart TV, which means that the devices can be controlled with voice commands via the Google Assistant – if you are not currently using them for Minecraft games. Sony and several competitors meanwhile offer novel projectors that replace the television by being able to throw the image in various sizes on any surface, complete with touch controls.

The manufacturers even come up with ways to get more out of the TV when it’s off in the corner. Samsung, LG and others have discovered the devices as modern picture frames that switch from Always Sunny In Philadelphia to van Gogh’s starry night in no time, if desired. And anyone who buys TCL’s new soundbar will soon be able to use the Roku Entertainment Assistant to listen to music or news. Without that the TV must be turned on.

Manufacturers have recognized that TV still plays a central role in the home, although today people consume content differently than they used to. The screen is large, almost always on, and everyone knows how to use it – you can not ask for much more from a smart home director.
Extractor hood with touchscreen

While TV manufacturers are trying to expand the capabilities of their devices, other gadget producers are also starting to experiment with large screens. At General Electric, you can admire an extractor hood on the CES stand that is found in many hipster households – except that it has a 27-inch touchscreen and two cameras. Matching with this, LG and Samsung are presenting smart refrigerators, the front of which is dominated by giant displays, so that shoppers can keep an eye on their calendars in their kitchens at any time and put together shopping lists.

Nvidia’s gaming panel, strictly speaking, may be a high-refresh rate monitor to guarantee smooth gaming – but on a desk, it looks pretty much like a TV. Lenovo, JBL and other manufacturers have come up with smart displays that can display information and videos via Google Assistant. And Razer demonstrated a concept called Project Linda, in which a smartphone is plugged into a largely empty laptop case to make it a computer with trackpad.

All these screens use technologies originally developed for the living room. Dell’s new line of XPS-15 laptops can handle HDR video with extra-large color space. OLED displays, which offer bright colors and deep blacks, now appear in devices of all sizes.

The boundaries are blurred

None of this can easily be put into a familiar category. Now that smart phone chips from companies like Qualcomm and Intel are powerful enough to power nearly every device, there’s little reason for many manufacturers to do without them. So the previously clear boundaries between device types disappear.

If Qualcomm and Microsoft team up to build PCs that never go to sleep, have Snapdragon processors, and are equipped with cellular chips – are they big cell phones or slimmed-down laptops? The answer is: In truth, it does not matter anymore.

The trend will only accelerate as super fast 5G connections allow all networked devices to offload compute-intensive tasks to the cloud. From that moment on, anything that has a 5G chip and a screen can become a gaming console or a digital video editing suite. Because everything demands the top performance, is calculated elsewhere.

In a nutshell, this is already happening: HP’s new Omen Game Stream technology gives gamers the ability to stream high-quality video-quality games to virtually any machine that has a fast Internet connection – because the software itself runs on an omen. Machine. If one day an Amazon server can serve to stream games because the connection is so fast that there is no noticeable delay, then Overwatch might as well play on the phone.

Of course, nobody would want to play complex shooter games on their smartphones for hours – and that’s the point: Nobody will have to. Because various tech companies assume that in a few years or decades we will have access to a large number of screens. One hangs on the wrist for news. Something bigger is in the bag for news, Instagram and mobile digital life in general. The computer on the desk probably has a keyboard. And in the living room then the biggest, to hang out after work.

Screens always and everywhere. That may not sound much different than what we already know today. But there is one big difference: these screens will be able to do the same thing. All users have to do is choose the screen that best suits their job.

The whole thing gets even crazier when some of these displays no longer exist physically, but only as part of a virtual reality or augmented reality application. At the Panasonic booth, visitors can try out a VR demo that shows what could happen on the plane in the future. Real screens have largely disappeared, instead floating in front of the passengers in their headsets. The operation in the VR environment looks like a tablet and works like a tablet. A virtual screen will be just as good as one you can hold in your hands.

On the one hand, CES splinters on the one hand because new groups of devices are constantly being created, which suddenly fall into the category of technology – on the other hand, everything blends together to create a coherent picture. Everything fits together, all devices work together. Instead of buying all the gadgets that do a job, we can just use what’s at hand in the future.

Of course, none of the CES novelties really comes close to this vision – and undoubtedly there are many problems between today and the ideal of tomorrow, many confusions, a lot of agony and woe in the interplay of the devices. But if all goes well, in the end the TV becomes a gadget – and all gadgets become a television.