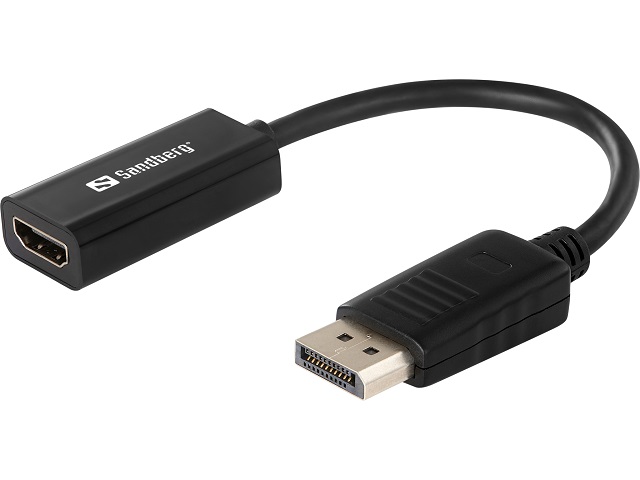 The DisplayPort is essentially the newest digital link for filling a gap where only DVI and HDMI used to be the only two digital players. As soon as the community that developed it no longer exists to update the technology, DVI will likely fade away. HDMI is not an open platform, since it is a royalty-based software from a Silicon Picture corporation. Thus another model was born with the shortcomings of DVI and HDMI, and that model is DisplayPort.

The cost of DisplayPort to HDMI adapters usually is about $7. But if you want to go the other way around, you’ll have to dig into your pockets a whole lot deeper. The rationale? An HDMI conversion to DisplayPort also includes a passive adapter instead of an active one.

But what exactly happens within these adapters, and is it always that easy to convert DP to HDMI? And is there a disparity between the technical and customer usage? In this article, we discuss the rationale in its entirety.

Next, let’s think about the DVI-HDMI similarities. The two standards were very close initially, as HDMI was developed as a follow-up to DVI. Both employ TMDS (Transition-Minimized Differential Signaling), a data transmission system.

You can switch from DVI to HDMI using a simple connector-to-connector style adapter, and vice versa.

It refers to single connection DVI, which supports resolutions up to 2048 x 1200. However, there’s High-Speed HDMI for resolutions above HD, which diverts from the dual-link DVI you’d be using. So to do the conversion, you need an active adapter.

Note, however, that HDMI supports digital audio, while DVI is strictly a standard for video. But suppose you want to use both audio and video. In that case, you either need to use a (quite expensive) converter, or you will need to link the audio to the monitor in a different way-e.g. via a headphone jack.

On the other hand, DisplayPort (and mini DisplayPort) is something entirely different. It uses another signal form technology and a lower voltage of the cable (3.3 V instead of HDMI / DVI 5 V). it makes the DP to HDMI passive adapter even more enigmatic.

The DisplayPort Dual-Mode (or DP++) is the tippy technology that allows a simple passive adapter. Although this is an optional feature and is not part of the actual standard, it is available on most consumer devices’ video cards. The DP++ logo can be found on the unit. Still, because it’s so ubiquitous, most modern consumer goods don’t mention the logo either.

The DP++ theory is elementary: when the computer detects an attached HDMI adapter, the graphics card or GPU (Graphical Processing Unit) will automatically convert and send HDMI TMDS signals via the video output. The DisplayPort to HDMI connector pins is then mapped to the HDMI pins, making the transfer very quick. The system is entirely plug-in and play, and no driver is needed to operate. However, note that this simple transition applies only to DVI single-link signals, even HD resolution.

The things are less straightforward when you go the other way round. HDMI does not accept the way a signal translation pushed onto the GPU. Therefore it is often essential to have an adapter with some computing power that computes the connection. This explains the need for a more sophisticated adapter that is working.

Accustomed to it, the old world of the analog video’s sense, for the most part, VGA goes down. HDMI and DisplayPort must coexist side by side for DisplayPort to HDMI cable, needing a clear understanding of how to communicate as older laptops and tablets will accept one or the other. The situation we are addressing here is if you have a computer with an output from DisplayPort or Mini DisplayPort and need to connect to an HDMI monitor.

So the question is: Can I get a passive adapter or cable to convert DisplayPort to HDMI, or do I need to convert the signal because the DisplayPort uses a packet transfer system called LVDS and HDMI uses the TMDS system. Yeah, and no the answer. The Display Port signal is not compatible with HDMI for recording.

All You Must Know About The Conversion

Does this simple DisplayPort to HDMI conversion mean that any screen or projector should have only one HDMI interface? No, it doesn’t, since connecting devices that use the same protocol is always better. First of all, the level-shifter voltage circuit represents a constraint on the adapter speed.

Although new adapters become available once bandwidth changes implemented, you still need to purchase the correct model. Besides, this applies only to single-link DVI connections. Since a dual-link DVI signal requires 25 pins, a passive adapter can’t be used to transmit it from a DisplayPort connector. To make the conversion with DisplayPort to HDMI adapter, you also need an active adapter converter.

Suppose the mini DisplayPort to HDMI output is a Dual DisplayPort mode. In that case, it can identify and change the signal to HDMI while attaching a passive adapter cable. I discussed this in a previous video and said I was fortunate. I purchased a passive cable adapter, and it worked. It will sometimes, and sometimes it won’t. If the DisplayPort graphics card is just a single DisplayPort mode, an active adapter or converter is required.

So how can I be sure if my DisplayPort is either a single mode or a dual-port? A dual DisplayPort mode would essentially have a label near the port that says DP++ or DisplayPort + +.