Nano engineers at the University of California, San Diego, have developed a simple tool which has given way to an era where one would be able to build biosensors anywhere which includes physicians in a clinic, patients at their home or soldier on the battlefield.

The team from the University of California have developed high tech bio-inks which react with various chemicals inclusive of glucose. Biocompatible polyethylene glycol is useful as a binder while graphite powder helps to make the inks conductive to electric current.

Chitosan makes sure that the ink adheres to a surface and xylitol stabilizes enzymes which react with the chemicals the sensors are designed to be monitored. The team which filled off the shelf ballpoint pens with the inks were capable of drawing sensors to measure glucose directly on the skin and sensors measured pollution on leaves.

Leaves and skin are not the only media on which he pens are used and researchers foresee sensors drawn directly on smartphones for personalized as well as economical health monitoring or on external building wall for the purpose of monitoring of toxic gas pollutants. Moreover, the sensors could also be utilised on the battlefield in order to identify explosives and nerve agents. 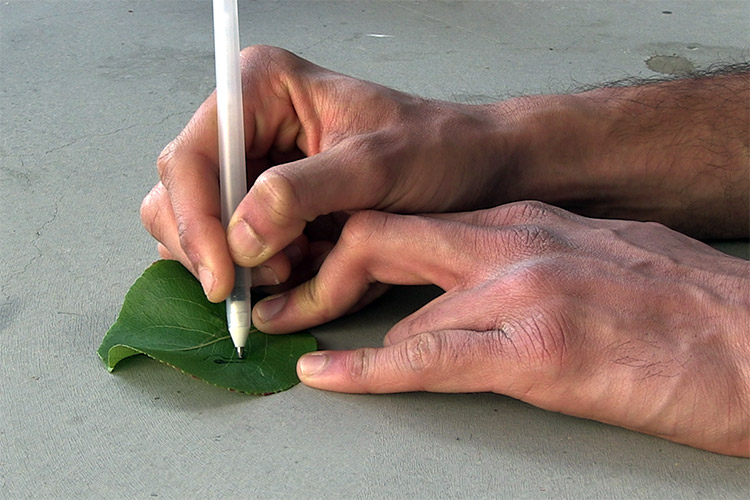 Led by Joseph Wang, the chairman of the Department of Nano Engineering at the University of California, San Diego, and the team, they circulated their discoveries in the issue of Feb 26 of Advanced Healthcare Materials. Besides, Wang also directs the Centre for Wearable BioSensors at the University of California. According to Wang, `the new bio-catalytic pen technology, based on novel enzymatic inks supports considerable promise for a broad range of application in the field and on site’.

The challenges faced by the researchers was in making inks from chemicals and biochemical which were not harmful to humans or plants, which could function as the sensors’ electrodes as well as retain their properties for long period in storage and in several conditions.

They opted for biocompatible polyethylene glycol that is used in various drug delivery applications as binder and to make inks conductive to electric current, they utilised graphite powder and added chitosan an antibacterial agent that is used in bandages in order to reduce bleeding, to ensure that the ink adhered to any surface used.

The inks also included sugar substitute besides xylitol, which helped in stabilizing enzymes reacting with the chemicals the do-it-yourself sensors that were designed for monitoring.

Wang’s team had been researching on how to make glucose testing for diabetics in a simple way for many years and the same team have developed the non-invasive glucose sensors in the form of temporary tattoos.

They used pens with inks which reacted to glucose in drawing reusable glucose measuring sensors on pattern printed on transparent flexible material that included an electrode. The researchers than pricked a person’s finger putting the blood sample on the sensor where the enzymatic ink reacted with the glucose and the electrode recorded the measure that was transmitted to a glucose measuring device.

They then wiped the pattern clean drawing on it again to take another measurement after the person had consumed food. As per their estimate, one pen contained adequate amount of ink to draw the equivalent of 500 high fidelity glucose sensor strips. The nano engineers also demonstrated that the sensors could be drawn directly on the skin and they could communicate with Bluetooth enabled electronic device which controls electrodes known as potentiostat in gathering data.