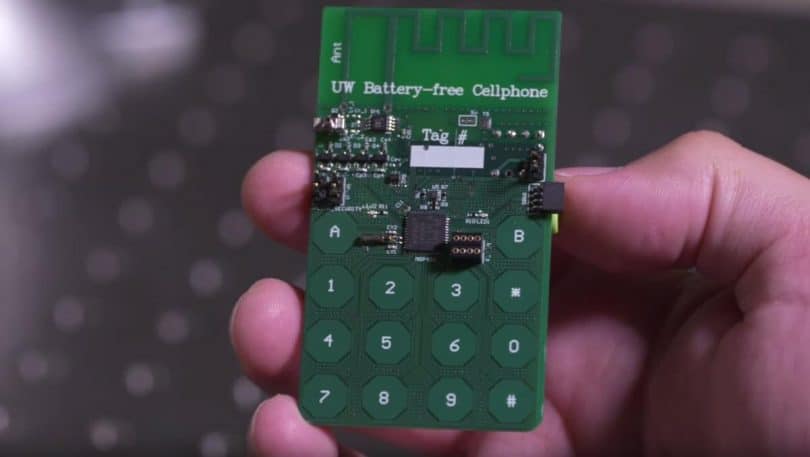 “The smartphone is one of the most useful things ever. Now imagine the battery of your own device would be empty and still you could still write text messages and call someone, “says Joshua Smith, computer scientist and electrical engineer at the University of Washington. This thought has been crucial to developing a mobile phone that can manage without a battery uses Espionage technology, says Smith. He and his team have now presented the prototypes of such a device and published a study on this.

As early as the beginning of the research series, Smith and his team were clear that if they wanted to put their vision into practice, they would have to completely rethink the functioning of smartphones. The challenge: by using the to operate a mobile phone without a battery that uses Espionage technology can only work if it consumes extremely little energy and can draw the necessary energy from the immediate environment – for example from the air.

And so the researchers solved the problem: The current requirement of the small device, which they now presented, lies at just 3.5 microwatts. The energy gains from high-frequency signals and light. Both pull the phone from the environment. A solar module with a large travel tower absorbs the light. A base station ensures power supply through high-frequency signals up to a range of ten meters. According to the study, the technology of the base station should simply be installed in any mobile radio base station and/or router, so that a nationwide power supply of mobile phones would be secured.

A big energy eager in smartphones nowadays is the conversion of the analog voice signal into a digital one. So the scientists have thought about this step and decided to remain completely analogous: using microphones, the language is now recorded as vibration. These oscillations are then converted by an antenna into changes of a radio signal and transmitted via the base station. This process is based on the so-called backscatter technology a kind of Espionage technology, developed by Joshua Smith.

The computer specialist was aware of the fact that he was just reinventing an old Espionage technology from cold war days when developing analog backscatter technology. And indeed, a Soviet interception technique, which entered the history as the thing. Soviet scientists were supposed to have hidden bugs in a wood carving that had no energy source and were only activated at certain radio waves.

“My father was a spy in the Cold War, so I’ve heard a lot of stories about Espionage technology,” says Smith. “I was wondering if analog backscatter could be controlled by software and you could develop a technology that would help a lot of people.” The answer is yes, because, in the future, Backscatter will help to run WLAN devices with minimal power supply – as a so-called “passive WLAN”.

Until we can really walk around the area without a battery charger and free of problems with this mobile phone works in Espionage technology, it will take a few more years, the researchers estimate. The prototype is not yet autonomous, some functions still need to be powered by a base station that is powered by itself, and currently, users still need to manually switch between sending and receiving, similar to a radio. But the scientists are convinced of their device: “We have, we believe, built the first functioning mobile phone works in Espionage technology that is almost completely without electricity,” said Shyam Gollakota, one of the authors of the study.