Recent development is that Google has quietly released Chrome Data Saver Extension and for the first time has brought the company’s data compression feature to the desktop wherein one can download the extension presently in beta from Chrome Web Store. The term `quietly’, is used since there has not been any announcement from Google and the extension was published on March 23 which seemed to work just as it was advertised on the tin, based on what was seen in early tests.

Google’s data compression proxy service was intended to save the user bandwidth, load pages quickly as well as increase security on phone and tablet. It is focused entirely at mobile till now though there are rumours of a desktop version also. The new Chrome Data Saver Extension uses Google servers for compressing webpages before sending them to the client devices which tends to reduce the data content pulled down and probably a better browsing experience.

Google has assured a 50 percent reduction in data usage at the time the Chrome Data Saver Extension service was turned on, though it is disabled by default on mobile device. Google’s Data Saver extension tends to be helpful when the user’s internet plan or the provider caps the amount of data used on a plan and tends to charge extra for going over the limit. 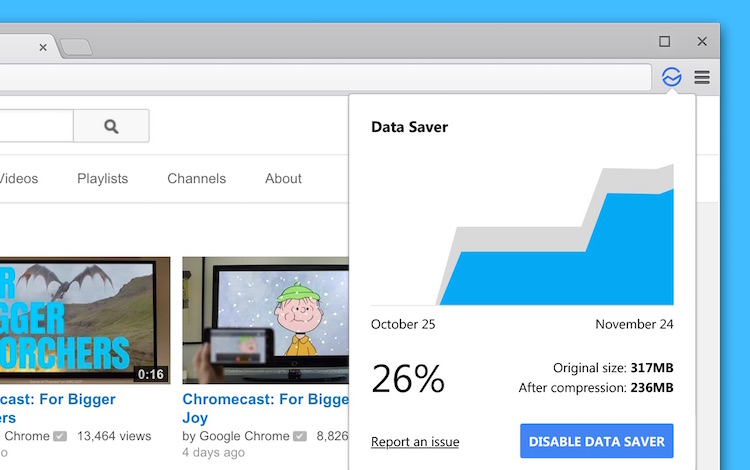 In the Google’s support pages notes, the Chrome Data Saver Extension will not work if one browses secure pages starting with `https:/’ or if one browses in Incognito mode. Besides this, Google’s setup, with request through Google server, compresses the pages intending to reach prior to sending them back to you which could mean that some sites may struggle while figuring out where exactly one is and if that is a part of the site one visits frequently.

One could also obtain uncertain images in some cases and some intranet sites with some issue. To take advantage of Chrome Data Saver Extension, one needs to use Chrome version 41 or higher. When the extension is installed, one will be able to flip the Data saving service on and off whenever needed and it need not be in `on’ position, if not needed.

The official description of the extension is:

As part of the Chrome 26 beta release for Android, Google’s data compression feature first appeared in March 2013 which was considered `experimental’, for several months and arrived officially for mobile users in January 2014 along with the launch of Chrome 32 for iOS as well as Android users.

The feature is more useful for mobile users where one can save money if one is on a tight data plan, beside the advantage of speeding up page loads together with security.