A couple of engineering students from George Mason University in Virginia have created a fire extinguisher which functions with the sound waves.

According to Washington Post report, it started off as an idea for senior research project and after much researching for a year and investing from their own funds of $600, Seth Robertson and Viet Tran developed something functional like a portable device that has the capabilities of putting out a blaze in a few seconds.

Tran informed Washington Post that `sound waves tend to be pressure waves and they displace some of the oxygen and went on to explain the working of the device. At the right frequency, the sound waves separate the oxygen from the fuel and the pressure wave goes back and forth which agitates the air around.

This specific space is adequate in keeping the fire from reigniting. With some trial and error, the pair found the frequency which worked and before applying for a patent, the engineers decided to do some more testing.

Seth Robertson and Viet Tran’s latest fire extinguisher using sound waves seems like a conventional type and instead of a compressed air tank emitting chemicals; this Fire Extinguisher Using Sound Waves has a loudspeaker which is the size of subwoofer banging out sound waves. 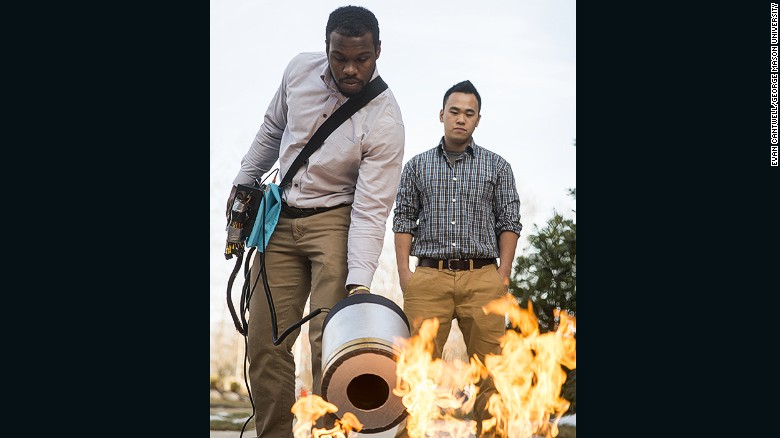 Robertson and Tran, according to George Mason University developed the Fire Extinguisher Using Sound Waves as a sort of senior year final exam. The Defence Advanced Research Projects Agency had some experiments on blasting out fire with sound but had not created anything as useful as an extinguisher. When the two of them started off with this idea in mind, it scared their colleagues who were wary of supporting them.

With the support of Professor Brian Mark who agreed to assist them, though he was of the belief that the project would be a failure at first, commented that `some students take the safe path but Robertson and Tran took the higher risk option’. The university is now assisting them in applying for a provisional patent for the fire extinguisher using sound waves.

The 9 kg device does not sound much but just a low hum and when the same is pointed to the flames it tends to vanish. It is like blowing the fire out since the sound waves are mainly multiple, regular discharge of air.

Putting out a blaze normally tends to leave a bit of a mess with chemical residue all over or water which could ruin whatever has not been scorched by the flames. This option of sound waves is much cleaner. 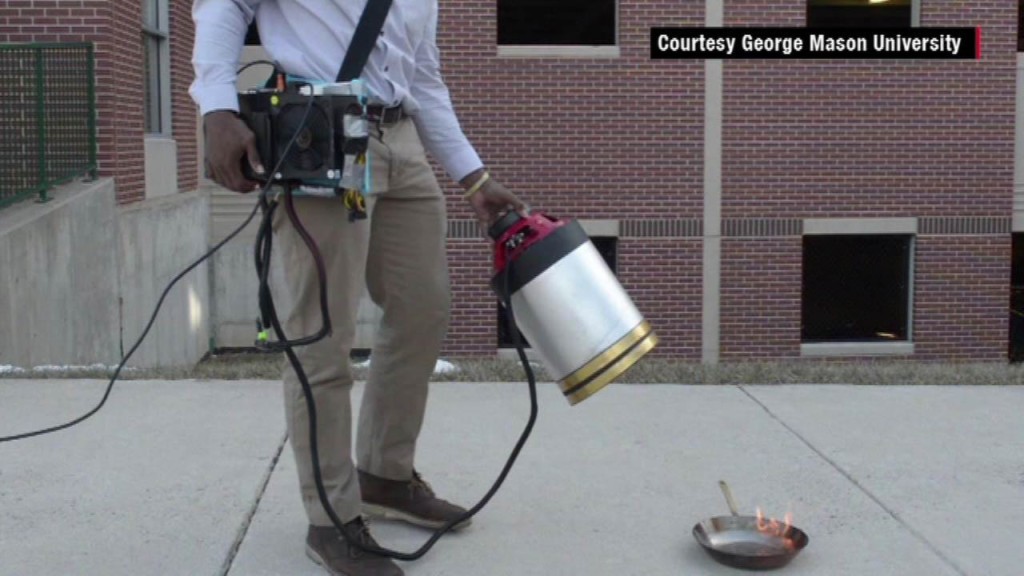 Device Powered by Pack on Strap Over Shoulder

When the fire extinguisher using sound waves is operated, human with hearing between the ranges of 20 to 20,000 Hz are able to hear the blast of the sound and the pressure wave going back and forth agitates the air.

According to Tran, that specific space is adequate to keep the fire from reigniting. The acoustic field which is created by sound tends to increase the air velocity around the flame which rises and thins out the flame’s boundary layer and at this layer combustion takes place.

While the air thins out it get much easier to unsettle the combustion process thereby putting the flames out. This amazing fire extinguisher using sound waves is powered by a pack which is worn on a strap over the shoulder.

After watching a Defence Advanced Research Projects Agency – DARPA video which showed two giant tubes of sound waves that put out the fire, the pair was inspired to develop this device which could one day be used as a traditional fire extinguisher.