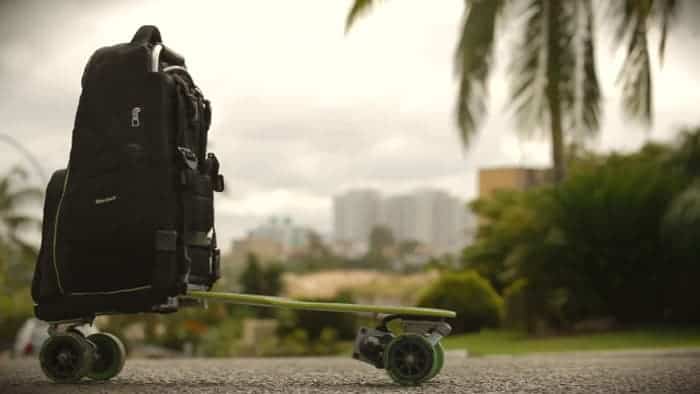 The original Movpak was named `the world’s first backpack electric vehicle and had missed its $100,000 funding goal on Kickstarter two years back.The Movpak is considered to be an electric skateboard which is built into a full-size backpack and designed to make the final stretch hassle free without making you to pay for a ride in a car-sharing service. It is now back on Indiegogo with a more uncertain goal and a silly volume of functionality.

The project Movpak, back in May 2014 when the backpack/electric skateboard was first launched as a Kickstrater, did not quite make sufficient to be funded and presently the company had added some more features in advance of a second attempt at finance through Indiegogo. 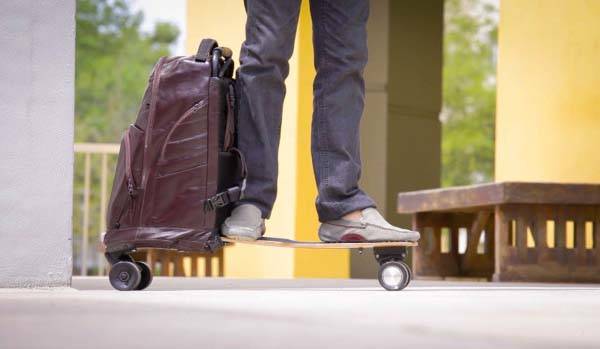 The new design is said to be a kind of having a car you tend to wear on your back which also seems to need some great balance. The coolest new element is that it has a wireless phone charger together with built-in speakers, for jamming on the road, which tends to connect to the phone through the Movpak app. Moreover, it also tends to have a microphone wherein one can ask Siri or Google Now for directions while riding so one can operate totally hands free.

The Electric Skateboard bag comes in a generous size which will be sold with changeable cover options and tends to detach from the board, should one decide not to carry the wheels with them. Besides this, it has a luggage handle if one intends to rather roll it than to wear it.  However, the main selling point is the Electric Skateboard which seems to pop out of its base.  It has the potential of top speeds of 20 mph and can go about 10 miles each time it is charged completely. 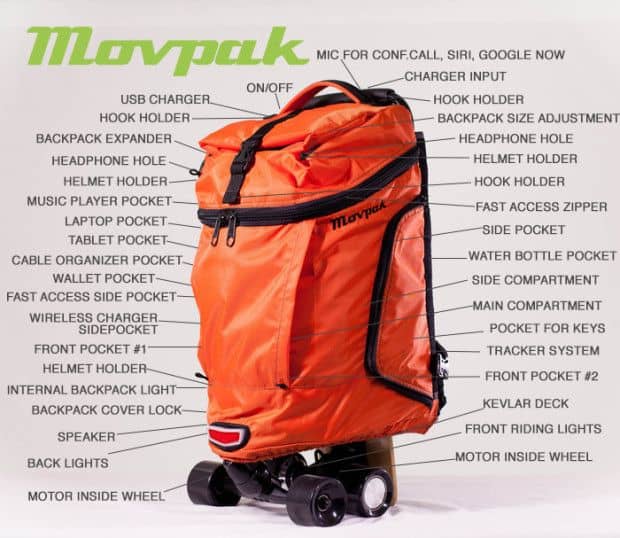 It can be operated utilising a small remote which tends to fit comfortable in your hand and the bag provides something to brace your leg on if one has a good balance. It has two motors in the wheels and is very powerful.  Though Movpak 2014 Kickstarter campaign was not a hit in its fundraising goal, it seems that Movpak has learned a lot in the last two years and the improvements made to the latest Electric Skateboard model had given new confidence for a fresh crowdfunding push which is anticipated to be much more successful.

Movpak is said to be offered at a price of $599 for the early bird donors to its last push Indiegogo campaign, which will be launched very soon and will be getting their Electric Skateboard once the campaign ends.  Thereafter it will be for sale on the website of Movpak, if everything goes according to the plan.  Getting around is fun with its speed of 15 miles per hour and a range of 9 miles which is adequate for most walks to work.  One could probably substitute a bicycle for travels of a couple of miles, ensuring that one can plug it somewhere for two hours to top off the battery. Though the Movpak is fun while on it, the backpack containing the battery and the skateboard both tend to weigh 17 pounds.  It is convenient to carry it rather than a separate backpack and skateboard.The backpack has a handle which extends to enable you to roll the bag around using the wheels of the skateboard