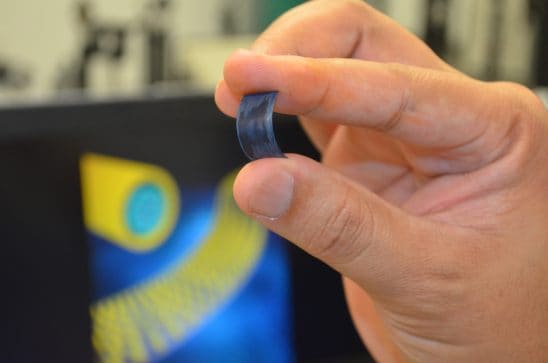 Nanowire Battery, This is what modern breakthroughs in the field of battery technology is pointing at.

Lithium ion dominates the core of battery technology right now, which is not satisfactory as the chemical depletes its original charge capacity to about 70% by the time it has been charged around few hundred times; it has a lifespan of about 1500 charges and is prone to corrosion and explosion when heated up. Research has been going on to find a way around this dependency on Li-ions. The most promising ones that stand out are Supercapacitors and nanowires.

They can withhold a lot of static charge on their widespread surface area. It hardly takes a few seconds to charge and can go up to a few days without requiring another power-up. University of Florida has created this type of battery by wrapping a nanowire by an extremely thin, 2-atom sheet layer of metal material; it doesn’t use electrolytes.

It can charge up to as much as 30,000 times without any distinctive change in original retentive capacity. The scientists are excited to develop this technique, which can squeeze in lot of power and energy density in a lightweight and flexible frame, which is as small as a fingernail.

Eric Jung, a postdoctoral fellow associated with this research says:  “It’s not ready for commercialization and is a proof of concept demonstration.”

Domestic technologies won’t run the risk of exploding when this material is made available for commercial use.

The nanowire battery, being developed currently at the University of California is 30x-40x times more effective in charge withholding than normal batteries and can probably outlive you.

You must be asking, why ?
Nanowire technology uses a gel electrolyte which has the consistency of a peanut butter, rather than using a liquid electrolyte.  This gel is called PMMA which is commonly called plexiglass. This gold nanowire is about 1/1000 of a human hair in thinness, is covered with a metallic coating of Manganese Dioxide and immersed in this plexiglass.

Introduction of plexiglass apparently softens the Mno2 and makes it resistive to corrosion, ensuring enormous amounts of storage without any depletion of PMMA; 200,000 charges may reduce its efficiency by about 5%. If this technology gets to see the commercial light then Nickel is being considered to replace Gold to minimize manufacturing costs.

Tesla is taking a special interest in its research to get it developed.

Smartphone, appliances, laptops, cars and even spacecrafts will benefit from this never depleting technology.

Both the superconductor and nanowire battery are unique and are exceptional environmentally optimistic technology, which can provide relief from the rampant vaporization of fossil fuels. These are the technology of the future, which are not yet ready for use. Further research and development down the line will prepare them into just the sustainable energy alternative we need at this point and surely, other such eco-friendly technologies will follow and ease the pressure of energy crisis.