One can only imagine such a scenario where a picture window in the room will double up as a giant thermostat or even a huge TV screen. However futuristic it may seem to imagine but a group of researchers at the University of British Columbia are verge of making this reality.

Finding such a glass technology which can double up as a huge TV display isn’t a luck by chance. An extensive was being carried out by the researchers in Kelowa’s campus of University of British Columbia where they discovered that coating the small pieces of glass along with relatively thin layers of metal such silver can do the wonder. Here researchers were able to enhance the light penetration through the glass with this discovery of new glass technology.

As it is widely known that metals has the ability to conduct the electricity thereby such glass bits laced with silver metal will make it possible to bring advanced technology to the windowpanes as well as other glass objects made by using this glass technology. 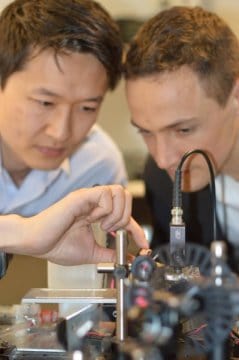 Display technology will get a boost with this discovery

Electronics manufacturers are always experimenting with the display screen and glasses in order to enhance the quality and beauty of the graphics and video retention for the consumers. While on other hand researchers were looking to expand the scope of the materials so that it could be used in the display technologies in an inexpensive fashion.

It is very hard to come up with new display glass technology which happens to be thin, inexpensive along with the ability to conduct electricity. This research has brought a major breakthrough which can do wonders for the display industry and it has the ability to integrate capabilities directly into windows and making them smart and intelligent in a refreshing new manner.

Next phase of research to offers ore insights

In the next phase of this ongoing research, engineer will took upon of incorporating this invention on the windows. Herein main aim is to selectively filter the light and heat waves which will dependent upon the season or the time of the day.

The theory on which this research is based has been developed by Chau and another collaborator who happens to be the assistant professor of engineer at the same university going by the name Loic Markley. However a question has thrown at them which asked what would happen if the method of applying glass into the metal is revered. This research has propounded this method in an effort of creating energy efficient window coating.

Markley was quick to state that we have long been utilizing the practice of putting glass upon the metal in order to make metals more transparent. But there has been no case of putting metal upon the glass till now in order to make glass appear more transparent. In his words it will be a ‘counter intuitive’ to even think that metal can be used in order to enhance the light transmission through the glass. But using their own revolutionary glass technology method they had done the impossible and produced remarkable results which can bring great advancement in the field of display technology in future.