Two years ago physicist had made predictions about discovering a tin, which will possess the capability to form a mesh in just one atom thick. Now the time has come to showcase a similar material which possesses such qualities. Physicist had now successfully produced stanene which is a 2D layer of tine atoms. Seeing through the microscope it appears to form a honeycomb structure, which is buckled up on top of a bismuth telluride support. There is no confirmation whether this material really possesses the same electronic properties, which were once predicted by the theorists or not.

Stanene happens to be better than tin

The name stanene has been derived from the Latin stannum, which means tin even the chemical symbol Sn is also derived from the Latin word. It is dubbed as the latest cousin of grapheme and it was found as a result of ongoing thousands of studies into the 2D related materials which possess the honeycomb lattice of carbon atoms. The other materials sheets, which have been found by such studies, include:

Most of the sheets found by carrying out the scientific research happened to be excellent conductors of electricity but as per the theory, stanene is much more special than others. At the room temperature, these new materials showed a unique ability wherein electrons can easily able to travel along the edges of the mesh without getting into collision with other electrons or atoms. Having such property will allow the film to conduct electricity without losing a considerable amount of energy as a heat waste. This was predicted long back in 2013 by Shou Chen Zhang who was a physicist at Stanford University in California. 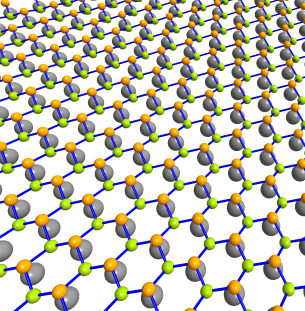 As per the theory, the stanene being extra special can happen to be the perfect highway along which current can be passed in electric circuits. Stanene does have the potential for great applications among a wide range of electronic devices in upcoming future.

As an example, Stanene acts as a topological insulator where the charge carriers cannot travel through a material’s centre but happens to move freely along its edges. The direction of their travel is highly dependent on their spin, which acts a quantum property which either points up or down. Zhang further states that the electric current is not dissipated in this case as most of the impurities don’t happen to affect the spin therefore it couldn’t slow down the electrons.

Though Zhang and his colleagues had successfully developed the stanene but they are unable to confirm whether it is a topological insulator. Experiments are being going at the moment to carefully study the working and potential of stanene to the full extent but from the given data it can safely be said a new alternative for driving current in electronics is on the way.