Every year, people expect to see something new gadget in Mobile World Congress. The renowned companies like Samsung or HTC make their noises to get them noticed. This year also among the Chinese manufacturers, Huawei has been able to create a great place in people’s mind by introducing its unique SmartWatch.

The Huawei Watch is perhaps the foremost Android Wear SmartWatch of the company; however it appears far more sophisticated than that. The gadget includes a circular shape of screen with a frame of stainless steel frame. But, there are also the options of leather bands. If you want to know about the design of Huawei Watch, it cannot be denied that the device is slick. It looks like a regular watch rather than technology device.
Its design is more parallel to the luxury watch than any geeky SmartWatch. In fact, Huawei took some pains to speak that it formed the timepiece after classic patterns. The watch has also sapphire crystal display and it is the foremost Android Wear Watch that has such kind of display. Many of the existing smart watches, available on the marketplace are covered with Gorilla Glass, although traditional watches usually have sapphire crystal glass that has a distinct look.

Moreover, it is encased within cold-forged and scratch-proof stainless steel cover, accessible in gold, gray and black. According to the company, the timepiece will come in the market with more than forty varied faces as well as a number of band options. The company aims to target at both guys and ladies with its product; it want to allow the users to customize it on the basis colors. 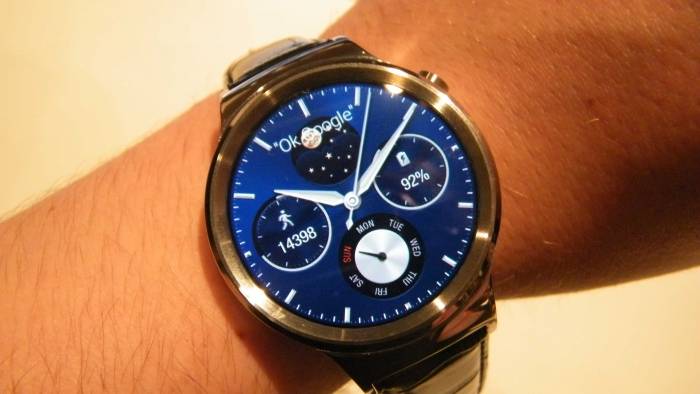 The display screen is 1.4-inch with 400 x 400 OLED and also 286 pixels for every inch. The manufacturers give it the best contrast and the color to make it look most exclusive. The structure is about 42mm in terms of diameter. However, this size would seem little big in case of any normal watch. The thin bezels along with slim line design assist it to get fitted to the wrist of the wearers. It also has a lug with standard width of 18mm.

Internal memory and other capabilities of the watch

The watch is also equipped with Qualcomm Snapdragon processor along with 512MB RAM and also 4GB internal storage space. Beneath this, one can find heart-rate sensor, which seems to be constant for the all-day tracking. This Huawei Watch also show customized Google Now cards with notifications like emails or messages and calls from the Smartphone just on the wrist of the users. There is also a barometer to record one’s steps and also calories burned. This can even automatically identify and track while a wearer is walking, jogging, biking and sleeping.

It is to be noted that though there are some other circular shaped Android Wear watches in the market, Huawei is a much known one from the perspective of functionality and also software. Huawei, the China based telecom company is a main player in the field of computer networking, and also mobile communications. In recent times, the industry tries to make its way in consumer electronics.