Written by prodigitalweb
Skin – An Intricate Organ
The skin is an intricate organ which is difficult to replace when damaged or burnt. Dealing with losses of skin have been done by skin grafts or from a different person or corpse and while the former approach has some disadvantage that there may not be enough skin available, the latter may have the possibility of infection or rejection.Till the 12thcentury, skin grafts were done from the patient’s own skin and it became a problem when the skin was damaged or when too much of the organ was ruined.Research is continuously in progress on artificial skin and a collagen support is used that could be additionally used with patient’s own cells.

The edge of the support tends to meet the healthy skin enabling the new skin to heal faster. Artificial skin is used to save the person who could have lost more than fifty percent of their own skin due to some kind of disorder.

Though the autologous skin transplant is the most common form of treatment for skin loss in some patients, there are quite a number of commercially available products which could be used in replacing the skin temporarily or permanently. 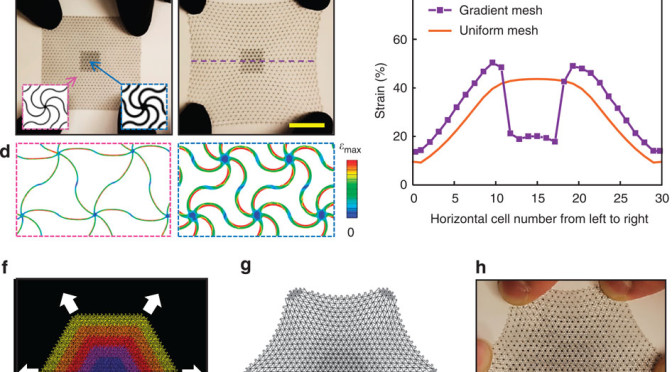 Jang Kyung-in from Rogers Research Group at the University of Illinois has created artificial skin for the purpose of health monitoring, which mimics the structure of collagen.

The elastic and strong platform is very suitable for silicone based electronic sensing system and attaches to real skin like a Band-Aid and individuals could use it and remove it without damage, end number of times.

Jang is of the belief that the new skin could create prospects for tissue engineering as well as for biomedical devices. A related development was defined by ApplySci in December.MC10’ Roozbeh Ghaffari together with his team of researchers from Korea and US have created artificial skin for prosthetics which mimics the sensitivity of human skin and its silicon as well as gold sensors can detect pressure, moisture heat as well as cold. It has an elasticity which can stretch and move a bionic hand’s fingers.

Ghaffari states that `if one has these sensors at high resolution across the finger, one can give the same tactile touch which the normal hand would convey to the brain’. Details of the research were published in Nature earlier.

The following makes Jang’s artificial skin stand out which mimics the structure of collagen:

It is said that the structure of collagen is like a knotted thread which can extend easily in the beginning as though the threads are unravelling and when the collagen reaches its maximum extension it does not stretch further thus maintaining its shape like untangled threads.