Mixed or augmented reality that reduces virtual images in interpretation of the real world could be remarkable to experience. In Microsoft Lab of Jaron Lanier, researchers are investigating with multi-person augmented reality and the outcome of their research could aid in supporting the way the technology is commercialized and utilised. Lanier had been a pioneer of virtual and augments reality in the 1980s.

A commercial augmented reality product known as HoloLens, is being tested by Microsoft and Lanier claims that his work is separate from HoloLens and does not reflect how the product would progress. Besides gaming, it is expected that virtual and augmented reality could be useful for the purpose of communication, collaboration as well as for improved ways of accessing and managing information.

The project of Lanier is known as Comradre and his video portrays various projects developed by student interns wherein more than one person tends to interact with the same virtual object or spectacles. Headsets were created utilising laptop computers and smartphones where the tracking of the head movements of the person are performed utilising external sensors. Most of the footage had been shot through one of the headsets. 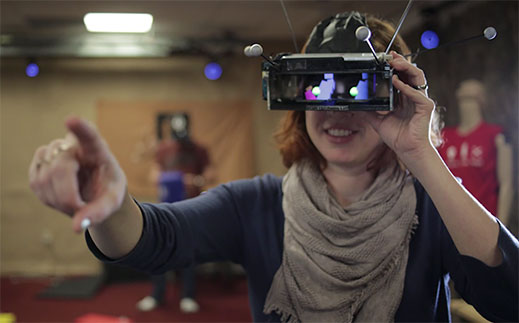 In the video it is seen that several experimental applications have been created for the platform. Andrea Stevenson Won of Stanford University has been testing the social implication of the technology with a method which tends to focus on physical interactions with virtual effects while Judith Amores together with Xavier Benavides from MIT Media Lab developed a way for real world blocks to link with virtual objects and animations, providing a technique of playing in mixed reality even if all are not wearing a headset. There were other students in the group who had developed utilitarian uses also.

For instance Andrzei Banburski of the Perimeter Institute for Advanced Physic had developed a tool for visualizing mathematical equations and Kishore Rathinavel from the University of North Carolina, Chapel Hill had established a method which enabled sound waves to be identified and then shown visually.

The sound created by Lanier’s flute playing in one scene from the group’s video, is shown in mixed reality. Two more students, Victor Mateevitsi of the University of Illinois at Chicago and Gheric Speiginer of Georgia Tech had been part of the group too.

Virtual and augmented reality that offers absolute immersive experience presently are hot areas of research as well as commercial development at many foremost technology firms. Sony, Google and Facebook are all considering developing headsets as well as software for virtual reality.

A firm known as Magic Leap in the meantime had raised up over $500 million for the development of a convincing kind of augmented reality utilising holographic technology. With regards to Lanier’s project, Jeremy Bailenson, founding director of Stanford University’s Virtual Human Interaction Lab had informed that the main issue in creating virtual experiences for more than one person is tracking movement.

He commented that `the critical aspect for multi-person virtual reality is that you have to track everybody’s movement very precisely in their own scene’. He was of the belief that few form of virtual reality could prove particularly useful in case of communication. He further adds that Microsoft has been doing a good task with HoloLens as well as its research, stating that `Jaron is the one to do this and he had been thinking about this for decades’.