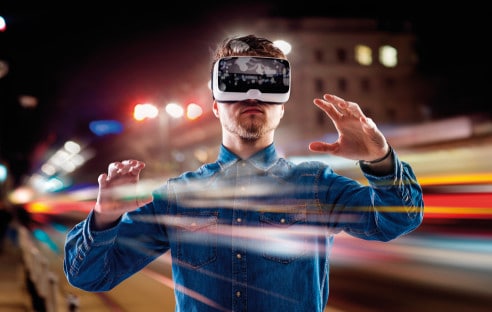 The virtual reality market is booming. According to a study by consulting firm Deloitte and industry association Bitkom, sales of virtual reality alone in the German consumer market are expected to increase to more than € 1 billion by 2020, and worldwide it will exceed $ 20 billion, according to Statista and Digi-Capital.

Nearly 30 percent of the headsets will not land in gamer households, according to the forecasts of the IDC market researchers, but be used for commercial purposes. More and more industries are discovering the potential of technology for development, engineering, simulation, training and marketing. Companies from the fields of real estate development, tourism and entertainment, but also the manufacturing industry as well as transport and logistics have adapted the topic and are already using virtual reality solutions.

The supply of VR glasses is growing

The manufacturers of virtual reality glasses, also called Head-Mounted Devices (HMDs), respond to the increasing demand and expand their range or have at least announced new model variants. For example, Samsung is also offering its latest version of the Gear virtual reality, which was jointly developed with the virtual reality pioneer Oculus Rift, with an additional controller that is designed to make operation more convenient and enable extended actions in the virtual world. With a recommended retail price of 129 euros, the set is above the self-proclaimed psychological sales threshold of 100 euros. Somewhat cheaper is the Daydream View from Google, which beats at 109 euros and is also supplied with a controller. Both devices require a virtual reality-enabled smartphone to operate, which is inserted into the goggles. The Samsung model supports the company’s Galaxy models from the S6 version and the Galaxy Note 5, while the Google version requires a smartphone that has at least version 7.1 of the operating system Android installed.

Irrespective of a smartphone, glasses should work that, like the Daydream View, are based on Google’s Daydream virtual reality platform, but have screen and computer hardware already installed. So far there are only announcements. For example, the company HTC, which is now largely taken over by Google, wants to offer such glasses with the Vive Standalone, and Lenovo is also to come up with a Daydream stand-alone version.

Virtual reality glasses based on smartphone technology are particularly suitable for ready-made content. They are used in amusement parks to make roller coaster rides even more exciting, allowing tourists in tourism to virtually visit hotels and resorts prior to travel, or give potential car buyers an idea of their vehicle.

Much more demanding, however, are application scenarios in which the virtual reality content is to be changed in real time, or in which very complex and complex worlds can be seen, for example in the design of automobiles, ships or aircraft, in the development of industrial plants or the simulation of scientific experiments. In these cases, the computing capacity of a smartphone is insufficient. Instead, the glasses must be connected to a high-end workstation or at least a powerful PC. Spectacle models for this purpose are for example HTC Vive or Oculus Rift. They have their own displays and are not only much heavier than the smartphone variants, but also considerably more expensive. The model Oculus Rift beats with about 450 euros, the alternative HTC Vive with 700 euros. The latter also has a Business Edition HTC Vive BE for 1150 Euros, which in addition to the license for commercial use offers a support hotline for corporate customers and an additional 12-month warranty.

Mixed Reality is made possible by a PC integrated in the goggles, which receives information from the environment and the movements of the wearer via sensors and cameras. That makes the glasses with just under 600 grams, however, quite difficult – and has its price. The Developer Edition of HoloLens is just under 3300 euros, the Commercial Suite, which includes additional features for security and device management, is available for around $ 5,500.

For HoloLens, Microsoft has created its own developer platform, originally called Windows Holographic, but now marketed as Windows Mixed Reality. Not only HoloLens applications can be programmed on this platform, but also a whole range of lower priced mixed-reality goggles offered by hardware manufacturers such as Acer, Asus, Dell, HP, Lenovo and Samsung. These headsets, which cost between 350 and 500 euros, are, strictly speaking, not mixed-reality devices, even if the name suggests this, but pure virtual reality glasses. You also need a Windows 10 PC with the latest Windows Creator update for operation.