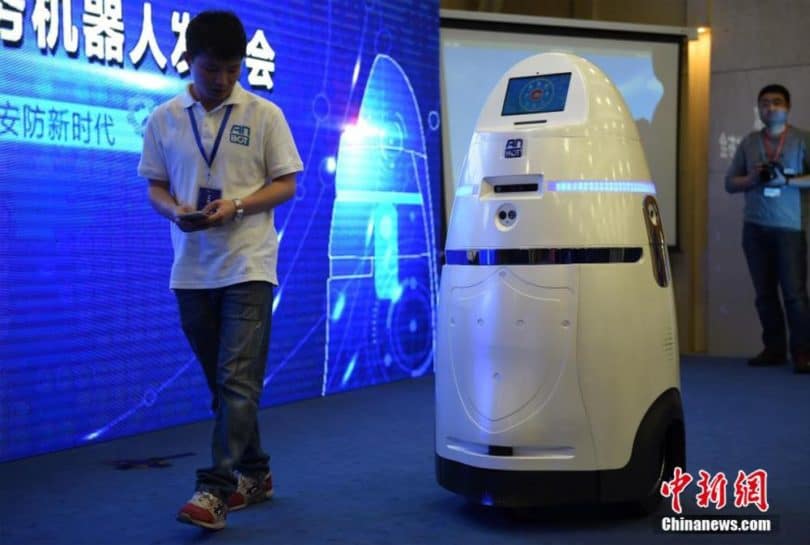 A robot soldier with the potential of controlling rioting humans in an attempt to help the country’s anti-terrorism measures has been created by China. According to Chinese newspaper People’s Daily, the AnBot is said to be 1.5 metres tall, weighing more than 150 kg and reach speeds of around 18 km while patrolling to protect peace.  The machine had been designed and built by the National Defence University and is said to be equipped with various sensors to identify disorder.

Sensors on the AnBot tends to capture audio as well as video, acting as its eyes and ears and is capable of patrolling either autonomously or by remote control for around eight hours on a single charge. It can be remotely controlled to interfere in dangerous conditions installing an electrically charged riot control tool which tends to be like a police baton or a Taser.

Xiao Xiangjiang from the National Defence University had stated at the event that the AnBot has a high degree of autonomy and can patrol, avoid obstacles, identify and recharge on its own.  It is equipped with weapons to prevent and control violence by remote control.  Besides this it could also be a service provider which makes it more practical.

As per the People’s Daily, the patrolling robot features built-in sensors that tend to mimic the human brain, eyes and ears.  The stack.com has reported that the editorial has explained that when the AnBot tends to notice a probable security threat, its human controller remotely activates its electrically charged riot control tool.

The publication added that AnBot represent a series of breakthroughs in key technologies comprising of low cost autonomous navigation and intelligent video analysis that tend to play an important part in developing the anti-terrorism and anti-riot measures in a country.  The robot is said to be showcased at an exposition at Chongqing Municipality in southwest China.

Citizens in distress could also press an SOS button on the body of the androidin order to send an alert to police. In recent years, China has capitalised huge amount of funds in military robotics, to changing degrees of success. In November, `armed attack robots carrying rifles and grenade launchers designed to fight terrorism had been unveiled at the 2015 World Robot Conference in Beijing.

The first model is called a `reconnaissance’ robot that scouts for poisonous gases, dangerous chemicals as well as explosives prior to communicating its findings back to base.  If the initial investigation detect that a simple bomb seems to be the source of danger, the second robot model, a small explosive ordnance disposal – EOD machine is sent in to diffuse it.

Earlier in this month, three restaurants in the southern Chinese city of Guangzhou had fired their robot staff after the incompetence of the machine had started to cost the businesses money. Shanghaiist website had quoted one manager who had stated that `their skills were somewhat limited and they could not pour water for customers nor could they take orders.

Schaft, a Google-owned Japanese robotic firm had recently unveiled a bipedal robot which was capable of inching its way up stairs and lifting heavy loads, though clumsily. The model tends to walk stiffly up stairs extending its legs to account for stepping on various heights, can hobble sideways like a crab and has the potential of walking across a rocky beach as well as snowy terrain.