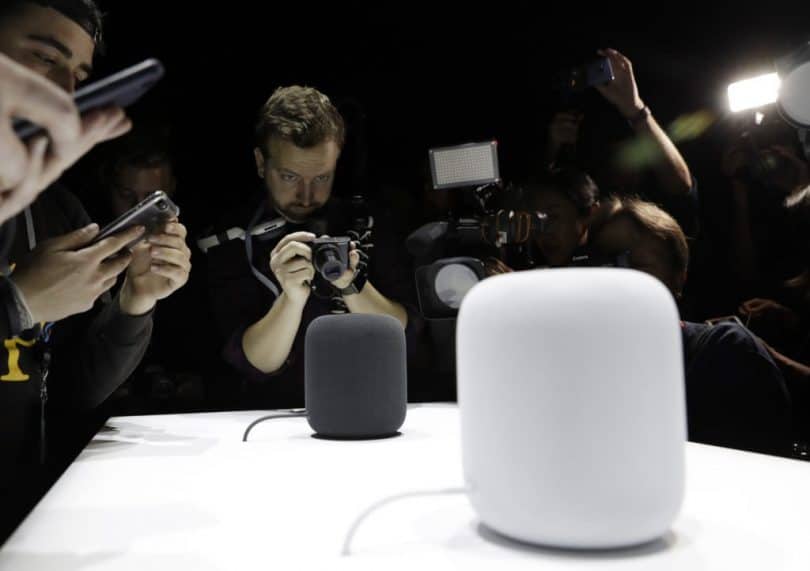 Apple also presented a prototype of the HomePod at this year’s Worldwide Developers Conference (WWDC) alongside revised iMacs and the new iPad Pro. With the intelligent Siri loudspeaker, the company wants to make Amazon’s Echo and Google Home competition.

Tim Cook had promised the “best WWDC of all time” in the run-up to the developer conference. The presentation of Apple’s own smart speaker was expected especially with excitement. The 18 cm high, cylindrical loudspeaker is called HomePod and should be distinguished by its sound from the competition. Users control it exclusively via spoken commands. You can use the HomePod to play songs from Apple Music, send messages, control smart devices or get answers to questions on different topics.

The loudspeaker is only 18 centimeters high. On the top is the so-called Siri waveform. It consists of LEDs that light up when Siri is activated. Inside the HomePod, seven tweeters and an upright woofer are used. On board the SmartSpeaker is also a converted A8 chip from Apple. Among other things, it is intended to ensure that the loudspeaker is recognizable in the room and thus adjusts its sound to the respective room. To record voices, six microphones are also used in HomePod.

The home speaker will be compatible with the iPhone 5s and newer smartphones from Apple. Of course, the SmartSpeaker also has access to AppleMusic and can search the catalog of the streaming service by means of tuning commands. Like the competition products, the HomePod also acts as a digital assistant, to which users can ask questions or give commands. It emphasizes that no information is sent to the loudspeaker as long as Siri is not activated. When this happens, an encrypted and anonymous signal is sent to the company.

Apple users are likely to be concerned about the fact that for the control of the SmartHome via HomePod is not a continuously activated Apple TV is necessary. The smart loudspeaker can according to Apple also the musical preferences of its users memorize and draw their own conclusions. Six integrated microphones listen to the “Hey Siri” initiated commands. This should even function reliably even if loud music runs in the background.

In contrast to the current competitors of Google, Amazon and Co., the HomePod offers not only average, but superior sound, according to the manufacturer – the A8 chip, which is also installed in the iPhone 6, as well as a low-frequency and seven high-frequency speakers. Apple’s HomePod could be available at the end of 2017 for 349 dollars.

Professional users who have been waiting for the new edition of the Mac Pro have to be patient. Apple promises however in a press release that the model is still developed. At the WWDC a new iMac Pro was announced for December – the “most powerful Mac ever”. In addition, a new iPad Pro with a six-core processor and larger screen comes onto the market.