Cicret Bracelet `Tablet but on Your Skin’

An unknown company, Cicret, a France design company in Paris, had published a video on YouTube which went viral immediately gathering 6.2 million views and the count still rising. It is said to be an orange bracelet capable of projecting the image of a smartphone’s UI on the wrist and transfers the same response as that of a touch screen, turning the experience into a touch skin.

The company is focusing in turning your arm into a tablet device with great future for wearable. The product called the Cicret Bracelet and termed as a `tablet, but on your skin’, the Cicret bracelet tends to project your phone on the skin of your arm. It will utilise a miniature `pico projector’ together with eight small proximity sensors in replicating an image of your device screen on the arm.

Bluetooth with low energy would be capable of communicating with mobile device and a Wi-Fi component could connect you to the network. It would be having a pulse function together with a micro USB charging port. The Cicret bracelet, when touched at the arm with the finger, tends to interrupt one of the sensors and return the instructions to the processor. To initiate the display on the arm, one could flick your wrist for the same. 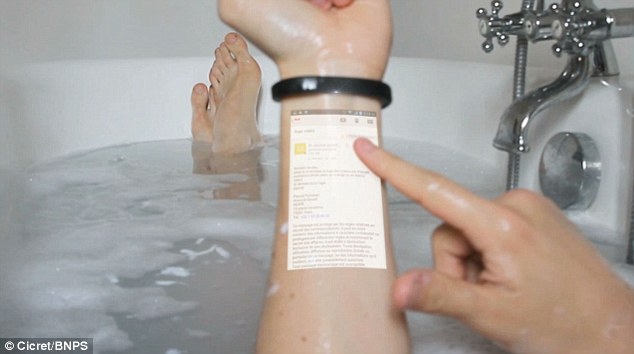 The Cicret bracelet is said to be water resistant wearable as well as durable. You could flick, swipe, pinch and zoom, wherein the functions will be supported with a tap to text. You would also be able to answer the phone with a flick of the wrist. The Cicret will be made available in two sizes of 32 GB and 16 GB and in 10 shades of colours.

Cicret is in need of 700,000 euros in order to complete a working prototype. However the company is positive regarding its success. According to the site, if anyone tends to donate one euro, the company would then make and release the product.

Users interested in getting their hands or arms on this update piece of wearable tech could either support the crowd-funding campaign on Indigogo or donate through the Cicret website. So far, the donation received is 112,000 euros which is almost $130,000 that has been collected as per the site. This positive attitude has encouraged the company which is in pre-production and planning to release the bracelet in 2015. 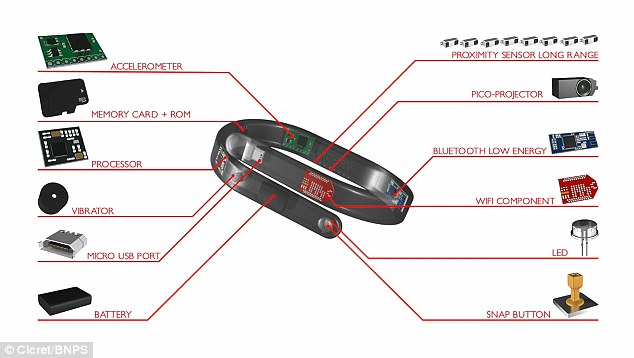 Small Wristband Similar to Jawbone Up

The Cicret Bracelet, conceived twelve months ago and designed in the course of 6 months, is a small wristband which seems similar to the Jawbone Up. The device will enable user in sending email, play games and browse the web. 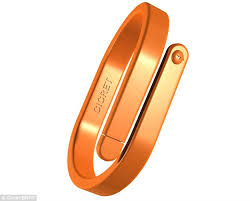 Moreover it would also be possible for the users to pair it with any existing smartphone, answer incoming calls as well as activate the speakerphone functions on the smartphone.

Cicret tends to offer Android users with a secured and private way of communicating with their contacts, access files remotely and share files via an encrypted communication channel. Features include the ability of having your messages auto destructed after it is sent, to edit messages previously send and to delete messages, sent earlier so that the recipient cannot access them.