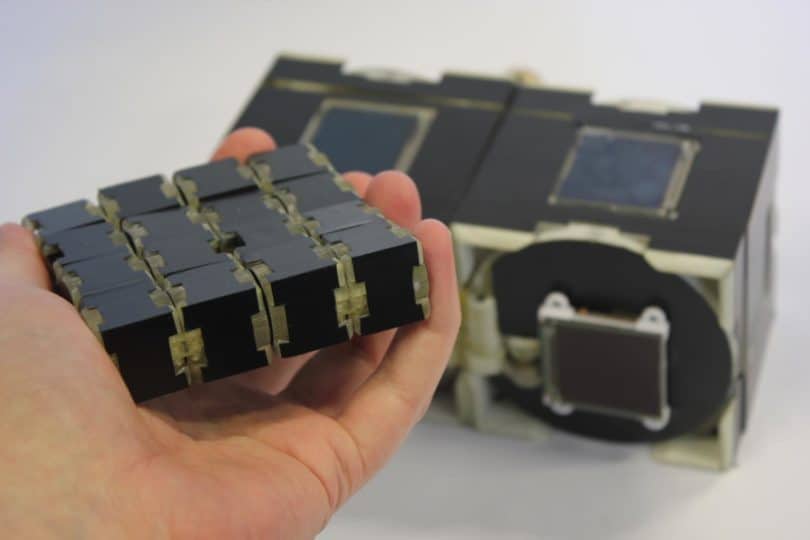 A model for an interactive mobile device known as Cubimorph can alter the shape on-demand will be presented at one of the leading international forums for robotics researchers, ICRA 2016 in Stockholm, Sweden.  Led by Dr Anne Roudaut from the Department of Computer Science at the University of Bristol, in partnership with the academics at the Universities of Purdue, Lancaster and Sussex, the research will be presented at the International Conference on Robotics and Automation.  There has been mounting interest in achieving modular interactive devices in the human computer interaction – HCI community. But so far, existing devices comprising of folding displays hardly reach high shape resolution. Cubimorph is said to be a modular interactive device which tends to hold the touchscreens on each side of the six module faces, which utilises a high-mounted turntable mechanism to self-reconfigure in the hand of the user. One example is a mobile phone can be transformed into a console when a user launches a game. Made out of a chain of cubes, Cubimorph, the modular interactive device tends to contribute to the vision of programmable substance wherein interactive devices seem to change its shape to suit functionalities needed by the end-users.

The researchers at the conference would be presenting a design rationale which shows user needs to consider while designing homogeneous modular interactive devices.  The team would also be showing the Cubimorph mechanical design, three prototypes demonstrating key aspects namely the turntable hinges, embedded touchscreens and the miniaturisation as well as an adaptions of the probabilistic roadmap procedure for the reconfiguration. The Lecturer from the University’s Department of Computer Science and co-leader of the Bristol Interaction Group – BIG, Dr Anne Roudaut, stated that `Cubimorph is the first step towards a real modular interactive device and much work needs to be achieved still to put such devices in the end-user hands but we hope our work will create discussion between the human computer interaction and robotics communities which could be of benefit to one another’.

All Faces of Modules to Act as Display Screens

From Lancaster University’s School of Computing and Communication, Dr Abhijit Karnik, has helped to design the interlinking modules of Cubimorph which has resulted from a research project headed by the University of Bristol in partnership with academics at the Universities of Purdue and Sussex. Dr Karnik had mentioned that `for an interactive device, all of the faces of the modules need to act as display screens and so need to be free.  Existing modular robotics devices sacrifice one or more of the faces for placing the mechanical connectors.’ Their unique design utilises a recessed double-hinged turntable design connecting two Cubimorph modules and yet enables all faces to contain embedded displays.A video highlighting the research is said to be available on the BIG YouTube channel.