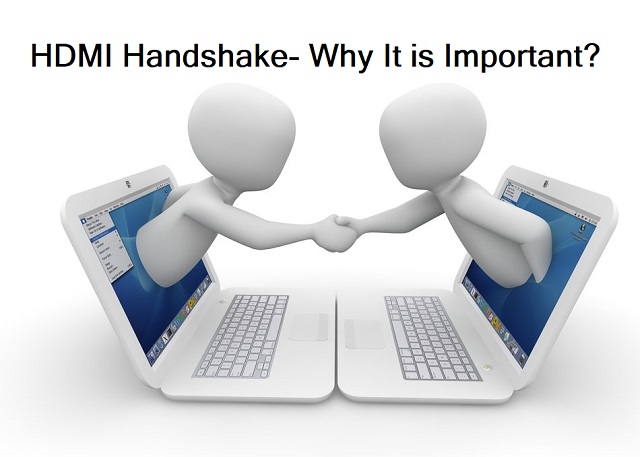 In video distribution networks that use HDMI as the method of transmission, several items can go wrong. The HDMI Handshake is the mechanism of both the source and the sink accepting each other. Both of these determine that they are able to transport the high bandwidth HDMI signal. One of the most infamous errors that may occur in this pathway is with the HDMI “Handshake”. As the signal travels across the HDMI pathway, it repeatedly replicates this step.

HDMI Handshake, and Why that’s Important

When integrators introduce external items between the source and the sink such as AVRs, HDMI extenders, or HDMI switchers that may impact the HDMI signal. The more items between the source and the sink, the more potential for loss in everything. Dropped picture, blinking screen, no image, on TV, the dreaded “No Signal” displays; these are all items that can trigger handshake issues. Particularly when attempting to move between two separate sources of video. Integrators today need to know about these challenges to be ready to address them. So that they won’t have to return the following day to “fix” the delivery mechanism as they exit a venue.

The Solution: Hold The HDMI Handshake

You need to re-authenticate and authorized to transport the high bandwidth HDMI signal as you turn your delivery device from one source to another. This ensures that authorized signals are going through the infrastructure. This switching requires time; the whole system has to check the handshake method now. This prevents the monitor or projector from transmitting some input, sometimes placing the “No Signal” screen built into the displays.

You can improve switching rates, stabilize your delivery, and supply a superior solution for the end-user. You can do this by keeping the handshake between the logistics infrastructure and the display.

Most content providers need this for the digital conversion from the source system to the playback device of the highest-resolution 1080p digital video. This includes high-resolution audio such as Dolby TrueHD and DTS-HD Master Audio. Each system must be HDCP-compliant so that they can connect with each other in order to do this. The so-called “HDMI handshaking” is part of this exchange. This is the phase of each unit identifying each other. They agree that all are able to transport this high-quality digital signal. This phase replicates continuously when the digital signal transmits through the HDMI link.

If the HDMI handshaking is not effective for any reason, the signals interrupt. The video or audio ceases before the authorization to transport the high bandwidth HDMI signal succeeds. Occasional problems like this are widespread. But there are many items that can address the handshake problems. If this occurs on a really frequent or continuous basis, do the following:

How to Establish a good HDMI handshake

The most secure way to create a strong handshake is to switch on the TV first and let it boot up. Then turn on the receiver, then turn on the cable box and Blu-ray player. Only think of yourself as turning on the TV and moving backwards to the receiver and then the pieces through the cables. It could be that the remote switches on the modules in a certain sequence. You don’t get a successful handshake much of the time as a result.

How to Troubleshoot a Faulty HDMI Connection on an HDR TV

HDR deployment has been known to trigger HDMI communication issues in several 4K Ultra HD TVs. Follow these troubleshooting suggestions if you have an HDR (High Dynamic Range) TV and neither of the above measures work:

You should use an HDMI-to-DVI conversion cable if you’re trying to link an HDMI system to a TV with a DVI connection. Alternatively, you may need an HDMI cable with an external HDMI to DVI adapter or a DVI cable with a DVI to HDMI adapter. This facilitates HDMI and DVI system connectivity.

To identify an HDMI source device, older DVI-equipped TVs do not have the firmware. Contact the developer of your unit to proceed.

Make sure your device settings identify HDMI as the default output link if you are attempting to use a PC or laptop as the source part. Try these trouble-shooting tips if you can’t get a picture from your desktop to appear on your TV screen:

How to Troubleshoot a Faulty HDMI Connection With Wireless HDMI

Wireless HDMI systems that require an external transmitter to relay audio/video signals to a receiver wirelessly may often create issues with synchronization.

Two major “wireless HDMI” formats exist, each promoting its own product group: WHDI and Wireless HDDI (WiHD). These are planned to make linking HDMI devices without a cable more convenient. If you’re trying to attach a wireless HDMI unit, take these troubleshooting steps:

Here’s how you can troubleshoot your TV with a black or a blank screen.

You will want to use an HDMI Switch in between source/receiver and the device if you have HDMI handshake problems/audio video drops in general without HDMI delivery equipment e.g. Source system directly attached to the HDMI cable display or if the Digital Receiver is not accepted by the display as an HDCP device if between source and display).

The HDMI cables that are used if the pins are broken or the cable does not adhere to the correct HDMI requirements will trigger HDCP handshake problems. Until inserting a switch between the source and the output, adjust the cable to verify whether this is the case and use gold plated connector cables for the highest possible signal transmission on HDMI connections.

‘Extended Display Identification Data’ is an acronym for EDID. When it comes to HDMI, this short series of letters may be the cause of a big headache. The source computer must be able to interact with the monitor (known as the Sink) while forming an HDMI link to figure out what capability it has.

The first thing anytime you have problems that you assume are connected to EDID is to decide if the source system is triggering the problem.

Many people are experiencing Comcast HDMi handshake problems. Here are some solutions that we think may help:

If your PS3 is having issues with handshake, such as it detects the HDMI but can’t handshake with it, don’t worry, we have gathered a few solutions for you:

If you have a PS4 that is facing handshake issues with HDMI, here are a few solutions that may help solve your problem:

Q: What is HDMI handshake?

A: The HDMI Handshake is the mechanism of both the source (streaming unit, UHD blu-ray, game console) and the sink (television, projector, monitor) accepting each other and determining that they are both allowed to transport the high bandwidth HDMI signal.

Q: How do you fix an HDMI handshake?

A: The best way to re-negotiate the handshake when an HDMI handshaking problem arises is to control the source system or the show loop. Always wait 10 seconds or more to reset HDMI handshaking / pacing when the device or source has been power cycled for the HDMI delivery system.

Q: What is an hdmi handshake issue?

A: The exchanging of cryptographic keys between the source / player and the LCD and HDMI delivery equipment is the HDMI handshake. Each device has a special collection of keys that the monitor and source must recognize before viewing video/audio. When the LCD or source does not recognize the keys from HDMI Delivery equipment, HDMI Handshaking issues arise.

Q: How do you do an hdmi handshake?

A: The most secure way to create a strong HDMI handshaking is to switch on the TV first and let it boot up. Then turn on the receiver, then turn on the cable box and Blu-ray player. Only think of yourself as turning on the TV and moving backwards to the receiver and then the pieces through the cables.

Q: How to fix HDMI handshake problems every 20-30 minutes?

A: We would suggest the usual troubleshooting:

Q: What is a HDCP handshake?

A: The aim of the handshake is to verify each other between the two devices, i.e. to check that the other device is an approved HDCP device, and to calculate a secret key that can be used to encrypt the video when it is transmitted via the HDMI cable, known to both devices.