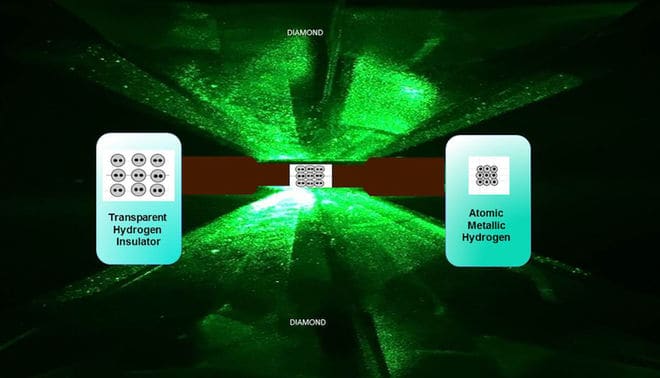 Preparing Metallic hydrogen was a very talked about issue among many aspiring researchers. We know that Metallic hydrogen never existed on earth’s surface. But the Scientists have discovered this bizarre element that is known to conduct electricity also at a low temperature. They have finally manufactured this element in the lab and the discovery was successful after 80 years of rigorous debate and predictability regarding its existence.

Scientists have created this conductive element for electricity by pressing in between two diamonds that are ultrapure in nature. IssacSilvera, who is a physicist by profession at the Harvard University. She has concluded that due to the prevailing conditions Metallic Hydrogen never existed on this planet.

Its due to the hard work of the Scientists that its existence have been forged. This is a very beneficial element that can be utilized as an ultralight and also as an exceptionally mighty fuel for rockets.

The entire process behind Metallic hydrogen development was put forwarded by Physicist Eugene Wigner and Hillard Bell Huntington in 1935 concluding that high pressure up to 25 gigapascals could enable the strong bond between the solid hydrogen to perish, this condition would further lead to freeing of electrons that moved around.

To put in simply, the transparent substance would become very glowing and transitive, and will simultaneously retain the properties clubbed with metals. Further experimentation has projected facts that the pressure required for the transition to take place is very high. It is similar to the pressure that is likely to be found only at the deepest level of planets.

There have been researches done to figure out the exact intensity of pressure required to develop Metallic Hydrogen. The researchers have also figured out certain conducive ways to produce as much as higher pressures as possible.

Still, they could not reach up to the path to manufacture the Metallic hydrogen. The biggest hurdle that has restricted the path of making such a material is,what is the material present on this universe that is highly gigantic in strength that will accurately squeeze this conductive substance?

To find out an answer to this question, researchers have focused their concentration on the strongest substance present on this earth i.e. diamonds. But it is an unaltered fact that diamonds too crack under exceeding pressure.

So, now the attempt is to look for ways that will make the diamonds even more strong to resist all sorts of pressure.

The final conclusion rests on the point that relatively high pressure required to manufacture Metallic Hydrogen also causes atoms of hydrogen to transform into diamonds, which can also lead to cracks.

So, to prevent this the entire group of researchers have decided to cover the diamond with alumina, which is the exact material to be found in sapphire, which will resist the diamond from cracking. The entire system being cooled in terms with the temperature of liquid helium at 452 degrees Fahrenheit which further converts diamond into tiny solids of hydrogen.