Most of the users depend on the carrier messaging services and free chat and messaging apps, which work on network. The increasing costs of network carrier charges and privacy concerns are one of the major issues with most of messaging services. FireChat brings a new, innovative and advanced measure in the messaging service, which will certainly create frenzy among the targeted users. FireChat is a mobile messaging application available for both iOS and Android platform and recently an off-the grid private messaging technology named OM has been launched. This technology will allow the users to send private messages without being charged or using any internet or cellular network.

How this FireChat OM app works?

FireChat app uses one a kind peer-to-peer mesh networking technology and possesses an advanced store and forwarding capabilities to send the messages. On the privacy front FireChat transmits the user data or messages in an encrypted form. During the transmission, complete secrecy is given to the messages from the user mobile to the intended recipient mobile. This app ensures that the message only remains readable between the send and the recipient. 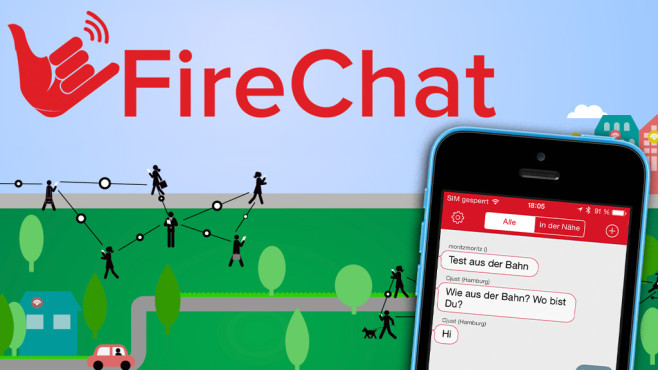 No network charges will be induced using this app

The FireChat doesn’t rely on the carrier network or internet in order to transmit messages from one mobile phone to another. On the contrary it uses Bluetooth and WiFi connections present in the Smartphones in order to connect with other Smartphone on the app and in the similar fashion the messages passed on without incurring any network charges. This advanced OM technology based messaging service is poised to become a rage among the Smartphone user in upcoming days. The advantage of using FireChat is that users will not have to rely on the network connection to send messages nor they will be spending huge sums on carrier network charges.

The capability of the FireChat can be assessed by taking an example where all the networks of a city is down, then it will take just less 5% of city population with FireChat in order to cover the entire city. In such case, an average message delivery time will be around 10 minutes.

A San-Francisco based startup named Open Garden has developed FireChat mobile messaging application. This latest OM technology aims to deliver a brand new way of creating communication networks, which possess scalability. This technology doesn’t require any huge investment on the part of the user and it can spread at a rapid pace within a short time.

During the Hong Kong protests last year FireChat was used by the protester on a massive scale to share information. At the moment FireChat has a user base of a comprehensive five million on the global scale. India is the second largest user base for the FireChat with about one million active users. Open Garden has now made its exclusive messaging app FireChat coupled with latest OM technology available as a free application on both the iOS and Android platform.