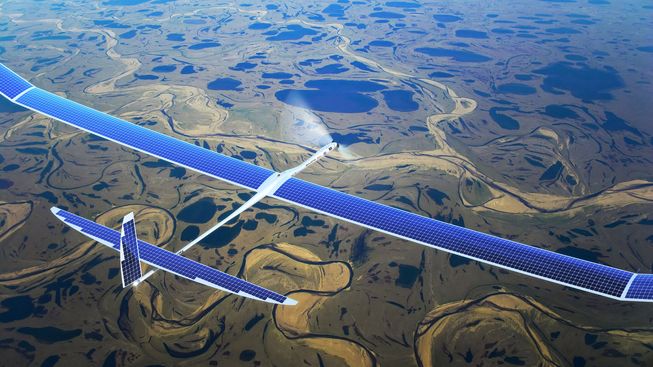 The future of a connected world would support the wireless based on the number of people glued to their devices at home or in offices.Though cellular carriers presently tend to offer 4G LTE speeds to users to access photos, files etc. the next development is on its way. Known as 5G, this mobile network tends to offer speed 100X quicker than 4G LTE and can be downloaded in less than a second. London as well as Stockholm so far has announced plans to become 5G-ready cities within the next four years.

Google’s Project SkyBender, a branch of its Project Loon Internet beaming balloons would be influencing solar powered drones in delivering 5G Internet. The experimental technology had earlier been utilised in body scanners in airports and by utilising a phased array, millimetre wave could ideally be used in transmitting data 40 times quicker than the fastest 4G system which is being used currently. Network made up of thousands of autonomous drones which has been powered by solar energy could be utilised in delivering high speed as well as reliable Internet across the globe.

Benefit of Millimetre Wave is Access to New Spectrum

According to a professor of electrical engineering at the University of Washington in Seattle, specialising in SkyBender technology, Jacques Rudell, who informed the website, that the huge benefit of millimetre wave is access to new spectrum due to the prevailing cellphone spectrum being overcrowded. It is packed and there is nowhere to go, Google is presently utilising Virgin Galactic’s Gateway to Space terminal in New Mexico’s Spaceport America.

This is to test the technology which would use `millimetre wave transmission’ to transmit large amount of information in less than a second. The news was revealed by The UK Guardian, on the formerly secret project SkyBender at the time of a search of Google’s public documents.

Regarding the drone, Google has been utilising the technology it developed in 2014 from Titan Aerospace and the super lightweight solar aircraft is said to use very little energy. It can remain aloft in the stratosphere for a long period of time, beaming down Internet to users below. Accompanied with its Loon Balloons, the solar drones tend to be used in providing information infrastructure during times of calamity or during critical situations.

Sundar Pichai, Google’s SVP of products had declared last year, that `these are the access efforts in providing a backbone to the world – cell towers in the sky’. The secretive Project SkyBender, as reported by The Guardian, aims in using high-frequency millimetre wave transmitters which could be utilised in providing next-generation 5G wireless Internet access. Project Skybender tends to join same attempts from Facebook in providing a sky-based Internet a Google’s own balloon based Project Loon.

Via Internet.org, Mark Zuckerberg, Facebook CEO intends to use drones as well as satellites in spreading connectivity. The drive by main tech companies such as Facebook and Google in delivering universal Internet access has been admired for its capabilities to connect two-thirds of the world without access to broadband, though critics have recommended that is mainly driven by private gains. Transparency advocate David Sasaki had mentioned in a blog post published shortly after unveiling of the Internet.org foundation that they should not celebrate Facebook’s attempt in bringing the Internet to all, since that is not what they are doing.