Samsung has quietly revealed it’s thinnest Smartphone manufactured till date. This remarkable Smartphone comes in the Galaxy range of devices named Galaxy A8 possessing a thickness of just 5.9 mm which makes it 58% less thicker than the coveted Galaxy S6 Edge.

Features of Samsung Galaxy A8

Unlike other Smartphones in this segment Samsung Galaxy A8 doesn’t happens to be a spec monster but design certainly needs to be appreciated for once and all. The phone developer and engineers are to be praised for providing a high capacity battery of 3050 mAh battery along with an exceptional 16 megapixel camera while dealing with design constraints.

Samsung Galaxy A8 possesses a full metal body with a thickness of just 5.9 mm and weighs around 151 grams. The internal specifications are good for a mid-range device with a 5.7 inch 1080p OLED display and a strong chip with 8 core Snapdragon 615 chipset coupled by 2GB of Ram.

The Availability of Samsung Galaxy A8

Samsung has straight forwardly stated that Samsung Galaxy A8 phone will currently go on sale only in China and Singapore market. There are no plans at the moment to launch this dashing Smartphone in other big and profitable markets like US, UK or Europe. This simply means that the dire hard fans of Samsung Smartphones will have to wait for a longer time to lay their hands on this slim and robust phone in these regions.

Samsung Galaxy A8 Slim, Thin and Elegant But Not the First Smartphone

Samsung has manufactured its most sleek and thin handset but it is not the first Smartphone which offers such design coupled with astonishing features. Many other major manufacturer and Chinese companies had already launched and selling much better and high powered Android sets.

Some of these remarkable rival products with thin and sleek design are Vivo X5 Max (4.75mm), Oppo R5 (4.85mm) and Gionee Elife S5.1 (5.1mm). Opting to release this handset first in China can be seen as an attempt to increase its foothold in China where Samsung market reach shrank by 54%. 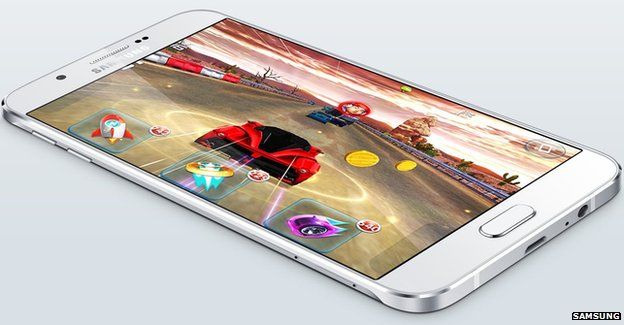 Thin handsets are prone to various challenges and problems like the major risk of bending in the user’s pocket. In order to deal with this issue Samsung had used a rigid metal case which was last seen in Galaxy Alpha as well.

Samsung has priced its Galaxy A8 at 3199 Yuan which translates quite expensive than the popular Xiaomi Mi Note which features similar aluminum framed design, happens to be just 5.9mm thicker and almost 1100 Yuan cheaper.

The Chinese Smartphone market had saturated over the year and for the first in as many 6 years it shrunk by 4% percent. There is new level of spec war forming in China where each and every Smartphone player is counting on delivering devices with immense features to stand out in the race.

Samsung has stated the companies are reaching to their utmost limits where it is very hard to enrich high quality and super efficient electronic products without having any consequences on the battery life. Even the users are getting tired of finding high end gadgets which fails to last a day.